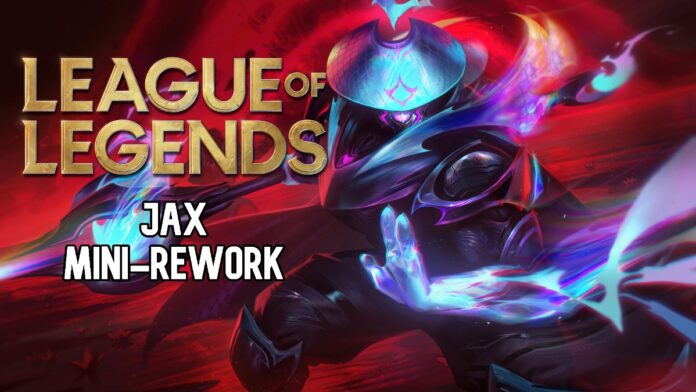 The lead champion designer for League of Legends has confirmed that Jax will receive a mini-rework in season 13.

In season 12, Riot introduced a new type of champion update called mini-rework or mid-scope update. In this update, Riot updates the champion’s kit without giving them a complete overhaul. That way, the champions can be viable and fun to play in the solo queue.

Many champions got mini-reworks in 2022, like Ahri, Rengar, Olaf, Taliyah, etc. Alongside doing mini-reworks for weaker champions, Riot has confirmed that they would be reworking Neeko, Rell, and, most importantly, Jax.

Jax is one of the oldest characters in League of Legends, as he was released in the alpha testing of this game. Even so, until now, his kit hasn’t been changed much, yet he is still a fan-favourite champion.

As a champion, Jax is easy to learn but hard to master because his kit mixes simplicity and complexity. And also, besides his ultimate and passive, his kit aged remarkably well for a champion released in 2009. Moreover, in ranked, his win rate is 50.56%, and his pick rate is a respectable 8.1%.

But as new and complex champions like K’Sante join the top lane, it makes competing harder for outdated champions like Jax. Because of this, the lead champion designer for League of Legends, Riot August, has confirmed on Twitter that Jax would receive a mini-rework in 2023.

As stated before, Riot August has confirmed Jax would receive a mid-scope update. Moreover, Riot Maxw3ll, champion lead at Riot Games & modes team, would also be helping out.

Riot pointed out that Jax’s update will be on the smaller side, as the update will primarily focus on his ult.

It is incredibly underwhelming as newer champions, like K’Sante, can change their entire class from tank to bruiser just from his ultimate. The aim of this update should be to make him on par with some of the current meta champions of League of Legends.

Riot did say that there aren’t any specific release dates. But we can expect Jax’s mini-rework to come out in the middle of season 13.