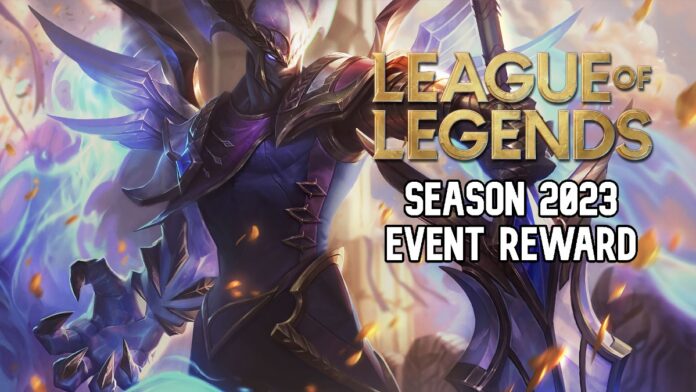 As the start of season 13 is on the horizon, the reward for the upcoming season 2023 event is revealed.

Riot releases new events every season, and this year was no exception. Riot released many new events in 2022. These events include Spirit Blossom, Star Guardian, Steel Valkyries, Worlds 2022, etc.

Similarly, as season 2023 is upon us, we will get new events in League of Legends.

From these events, players can get various rewards. Furthermore, some rewards are Blue Essence, chests, icons, skins, wards, etc.

For the rewards on the season 2023 event, Riot will give away 2023 Season Start Ward (Aatrox Ward) for participating in the event.

Wards are one of the essential items in League of Legends. It removes the fog of war from the map and grants vision to a team. However, the team is granted vision only for a limited time and can be countered with an Oracle’s Lens.

Players can buy three types of wards: Stealth Ward, Control Ward, and Farsight Ward. And players can also equip skins to them as well. Even though they might not be as popular as champion skin, they are still suitable for what they are.

Currently, it is called “Season 2023 Start Ward” or “Aatrox Ward.” As for the Design, it looks incredible. Moreover, the design is Aatrox’s Darkin blade, which looks fantastic.

Furthermore, this ward skin might hint that we are getting a Darkin event sometime in the future. Recently, Riot has been expanding the Darkins. Firstly, in the preseason 2023 roadmap video, they announced that there would be a new Darkin champion coming in season 13. Moreover, a Darkin event is happening in Legends of Runeterra right now, called The Darkin Saga. It introduced Kayn and Varus into the game, alongside many other new Darkins. Not only that, Aatrox is leaked to be coming in the game sometime in the future.

Even in Wild Rift, there is a Darkin event happening right now. In the new Wild Rift patch, Aatrox and Kayn were just released. So we can expect that Riot is planning a Darkin-themed event sometime in the future for League of Legends.