As we are at the tail end of season 10 of Apex Legends, Respawn has slowly started to reveal everything they have in store for the upcoming season 11.

Keeping up with the tradition of releasing a new character at the start of every new season, Respawn has decided it is finally time to introduce Ash to the current legend roster. Even though Ash made her official debut in Apex with the Broken Ghost quest, she was actually introduced back in Titanfall 2 as an antagonist.

Read More: Best Caustic Skins in Apex Legends 2021: Ranking All the Skins from Worst to Best

Many diehard Titanfall fans were ecstatic to figure out that she would join the current roster as Respawn has been teasing her for a while. Even early playtesters and influencers who got their hands on the new season stated that Ash would replace Wraith.

Now, TSM FTX ImperialHal who is often considered to be the most successful competitive Apex Legends player is claiming that she might also replace Octane in the current character meta in the game.

As Wraith has been abandoned by the pro community following her nerfs, speed junky Octane joined her place. Unsurprisingly, after his jump pad ability was buffed, his pick rate within the pro tournaments skyrocketed.

However, with the release of Ash, that all might change as her kit is already sounding really powerful so far based upon leaks and rumors. Since her rumored Phase Breach ability will be able to make portals similar to Wraith, this may provide a safer option for squads to rotate around the map rather than using the jump pad.

That being said, Respawn hasn’t officially come out and revealed all the details surrounding this new legend, as of writing. But if the leaks from early playtesters are to be believed then expect her to completely shake up the competitive character meta in the game. 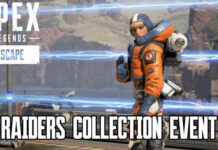