Here is how you can obtain the powerful Mists of Helheim Heavy Runic Attack in God of War: Ragnarok.

God of War: Ragnarok goes above and beyond when it comes to offering the best of Kratos. Not only can you unlock new skills for Kratos, but also customize and upgrade your armor and weapons to amplify their performance in battle. One such upgrade is Runic Attacks, which work as slottable abilities for Kratos’s weapons.

Read More: God of War: Ragnarok – How To Get Helios Flare

Since you already start the game with two of Kratos’s most iconic weapons, Leviathan Axe and the Blades of Chaos, you can further improve their performance with the help of Runic Attacks. The Mists of Helheim Runic Attack unlock 14 unique abilities that can be slotted on the Leviathan Axe.

Runic Attacks in God of War: Ragnarok grants Kratos the ability to perform special attacks with his weapons. And the more you upgrade these runic attacks, the better they perform and give you an edge in battles. Having said that, Runic Attacks are not easy to obtain. That’s why this guide will help you locate the Mists of Helheim and also go over its stats and upgrades.

How to Find the Mists of Helheim in God of War: Ragnarok

Having said that, the legendary chest is not in a straightforward location, so you can easily get lost along the way and miss out on this Runic Attack completely.

At first, you have to get on your boat and get past the cave on the outskirts of the ruins. Then, dock your boat by the entrance of the cave and head towards your left. Then, climb up the stone wall and walk straight until you reach the ledge.

Now, you have to jump on the stone platform to your left and take a sharp turn to your left again instead of following the bridge ahead. Once you reach the dead end, have Freya shoot her Sigil arrows, and then hit the area with your Blades of Chaos multiple times to ignite it.

Once you’ve done that, hop down from the platform and get on your boat. Now, row towards your right and keep heading straight. Keep in mind that this area won’t open up until you’ve interacted with the stone ledge in the ruins.

Now that you’ve reached The Veiled passage, which is towards the east from the Cliffside Ruins, dock your boat and head left from the hanging corpses. Then, climb up the walls and take the path to your right and continue walking along that path until you reach the exit of the cave.

The hard part is basically over at this point. So, exit the cave and climb down using the chain. You will be able to clearly see the Legendary Chest from the ledge. Have Freya use her Sigil arrows and use your Chaos blades to blow up the golden boulders obstructing your way. Then, hop down the ledge and claim your Mists of Helheim Heavy Runic Attack.

Mists of Helheim Stats and Upgrades

The Mists of Helheim Heavy Runic Attack grants Kratos a bonus of 1 Damage, 3 Frost, and a cooldown time of 140 seconds. This heavy runic attack allows you to cast large area-of-effect attacks that can freeze enemies caught within the attack radius.

Since you can only equip one Runic Attack with your weapons at a time, the Mists of Helheim will come in especially handy in situations where you’re dealing with multiple enemies. Moreover, it also comes in handy when you’re trying to stop enemies in their tracks.

The upgrades increase the blast radius and duration of the Frost status effect, and also stun enemies at Level 3. So it is definitely worth spending your XP on. Below are all the Stat bonuses and effects you can enjoy from using the Mists of Helheim Heavy Runic Attack from Level 1 to Level 3. 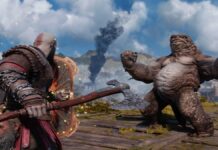