With the R6 Esports transfer window being opened, Rogue has announced a shuffle for their Rainbow Six Siege roster.

The European team has bid farewell to three of their members, including the two players of AceeZ and Prano, and their strategic coach Rcuth.

Rogue had a dominating start to stage 1 of the EUL 2020 season, but since then the team completely lost its momentum and had to survive the relegations. The 2021 season was an improvement, but not by a lot. Rogue managed to gain enough SI points to qualify for Six Invitational 2022; however, the org ended up with a 13 – 16th place finish, after a loss from the APAC team of Elevate.

With this roster change, Rogue will now look to change up its formula and try to show a better performance with some new face in EUL 2022 season. The new season is set to start sometime in March, so keep following us for the latest updates. 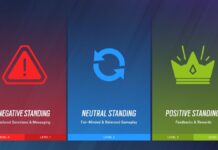