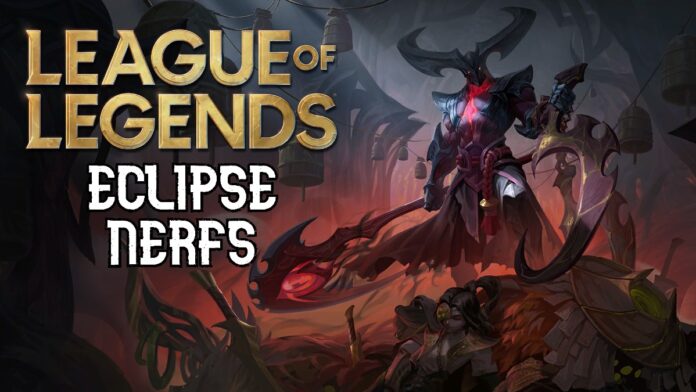 After nerfing the most overpowered item in the game, Riot finally revealed their reasoning behind the nerf.

The item rework and the addition of mythic items considerably shook the meta. The pre-nerfed Stridebreaker, Turbo Chemtank, Goredrinker, Immortal Shieldbow, etc., ruined the meta at one point or another.

Even though mythic items were made to aid a specific role in the game, some of the items become so overpowered that crafty players started to build mythic items on champions that the developers did not intend. For example, Immortal Shieldbow is supposed to be an ADC item, but the champions who abuse this item the most are Yasuo, Yone, and Irelia. Because of this, some mythic items are hard to balance.

One of the recent broken mythic items is Eclipse. Eclipse was originally meant to be an Assassin item, but later on, many bruisers started using it. Because of Goredrinker and many other mythic items, Eclipse was more of an underrated item in the past. For example, only Zed and Vi mainly used it. But after the durability update, many players started leaning towards Eclipse and realized how broken it was. After that, players also started abusing it using their favorite champion. One of the champions that abused Eclipse most was Rhaast (Red Kayn).

After many months, Riot finally nerfed Eclipse in patch 12.19 alongside Master Yi and Rek’sai. Later on, Riot Phroxzon states their reasoning on why they nerfed the Eclipse.

Reason Behind The Eclipse Nerfs

Eclipse has a unique passive where hitting an enemy champion with 2 separate attacks or abilities within 1.5 seconds gives them a bonus AD damage and gives the user a shield for survivability.

RiotPhroxzon stated that Eclipse was supposed to be a risk and reward item for bruisers. But it has a forgiving scaling for the early game, given the survivability, great damage, and Armor Penetration. That’s why winning a 1v1 using the Eclipse was much easier when compared to the other mythic items. The same goes for Assassin’s as well.

The assassins are supposed to be squishy yet with high DPS. But with Eclipse’s sustain, it was easy for assassins to win every single duel in the game without losing much of their health. Hence, Riot nerfed the damage of the Eclipse.