Last season, Riot tried to expand the Jungle champion pool by adding Darius, Garen, Talon, Zed, Diana, and Mordekaiser to the list. However, that experiment flopped drastically. Most of the champions failed to surpass a 45% win rate while others only had a 40% or below 40% win rate. And since then, Riot never really buffed off-meta jungle champion up until now.

League of Legends’ Gameplay Design Director Mark “Scruffy” Yetter has previewed the upcoming patch 11.8 today. And it seems, they are once again planning to buff off-meta Jungle picks like Zed, Darius, Mordekaiser, Morgana, and Diana on LoL patch 11.8.

“Another round of opening up new champs to the jungle pool,” Riot Scruffy on the upcoming jungle changes.

Here are all the changes:

Kog’Maw finally gets a VFX update in League of Legends 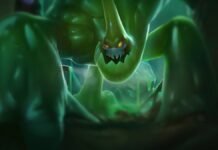