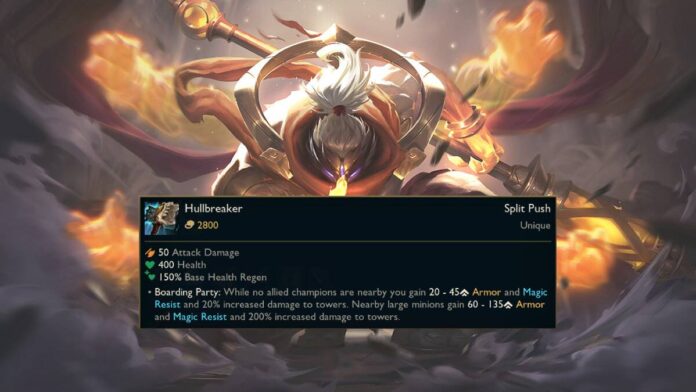 Earlier this month, Riot Games confirmed that they are currently working on two new items and one heavily reworked one. For the rework, Sanguine Blade was selected as it is currently very underwhelming and only has a 0.3% pick rate/popularity among Legendary items.

“This item has an awesome solo operative fantasy, but its stat package has struggled to support it,” Riot on the Sanguine Blade’s state.

Now, Riot Games has officially revealed the upcoming Legendary AD item in League of Legends called the Hullbreaker that is going to replace Sanguine Blade.

Hullbreaker is basically removed Banner of Command on steroids. Hullbreaker will not only empower minions but will also grant split pushing champions 20 – 45 Armor and Magic Resist that will be crucial for some AD champions to do the side lane jobs more efficiently.

We have previously seen how broken split push can be with Banner of Command. However, to counter Hullbreaker, Riot is also releasing a Legendary Tank item that will have a binding effect similar to Knight’s Vow and Zeke’s Convergence.