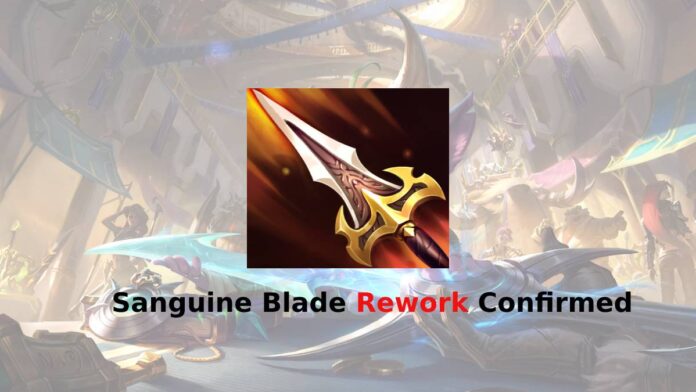 Riot Games has confirmed that Sanguine Blade is getting a rework in 2021 with a lot of new changes.

Sanguine Blade has a unique effect, Frenzy, that heavily favors split pushers. But as the item costs 3000 gold, most of the time it gets overshadowed by lethality items like Serpent’s Fang, The Collector, and some others. Moreover, currently Sanguine Blade only has a 0.3% pick rate/popularity which is one of the lowest in the game.

However, in the latest dev post, League of Legends’ lead game designer Jeevun “Jag” Sidhu has confirmed that Sanguine Blade is getting a heavy rework in 2021.

According to Riot Jag, Sanguine Blade’s rework will hit the Summoner’s Rift along with the new tank Legendary item in Summer 2021. Both items will be released in the same patch, as they’re pretty top lane/split push focused.

“This item has an awesome solo operative fantasy, but its stat package has struggled to support it,” Riot on the Sanguine Blade’s current state.

Therefore, in the rework, they are removing it from the lethality space and it will now become a more appealing item for any AD champion focused on side laning as their win condition.

Riot will also be shifting Sanguine Blade’s power so that it can now become more useful against multiple champions. Furthermore, to make it work in the pro games as well, it will now also partially index into taking a tower that is being defended by a durable opponent.