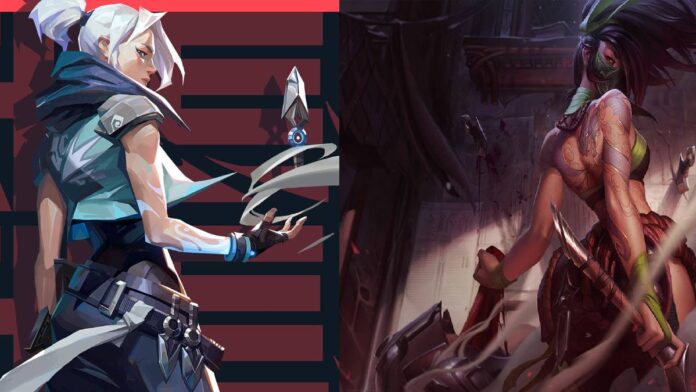 An artist named Carmen Carballo made a gorgeous looking VALORANT’s Jett theme Akali skin and both the Directors of VALORNT and League of Legends are impressed.

Riot Games’ newest title VALORANT came out on June 2, 2020, and took over the FPS gaming community by storm. Riot already released a couple of skins in VALORANT and the most recent Elderflame skin got a lot of attention. On the other hand, in League of Legends, Riot is also introducing a bunch of new skins including the most recent’s Spirit Blossom skin line. However, the two universes are yet to collab.

But recently an artist named Carmen Carballo made a Radiant Akali skin concept that collaborates both VALORANT and League of Legends universe.

In this Radiant Akali skin, Akali has a very similar vibe to VALORANT’s agent Jett. The skin has Jett’s silver hair, her knives and hoodie while keeping Akali’s mask. The skin color tone is also very similar to the skin tone of Jett.

And ever since it was posted on social media fans started to discuss the possibilities of it making in into League of Legends. Fans are also taking about VALORANT theme Phoenix skin for Ekko, Brimstone theme skin for Graves, and so on.

Seeing the skin even the directors of VALORANT and League of Legends, Riot Ziegler and Riot Meddler were impressed as well. As Riot Meddler said, “Damn, that’s pretty legit. We should see what we can figure out.”

As there has been no cross over between League of Legends and VALORANT yet as they share a different universe, skins could be a great way to potentially collaborate between these two titles.