After Android, iOS users can now pre-register for the League of Legends: Wild Rift beta testing.

League of Legends: Wild Rift is Riot Games’ newest title for both the console and mobile users releasing 2020. In order to test things up and show the players what they might expect from the game, Riot released an Alpha test a couple of months earlier.

However, only a limited number of players from Brazil and the Philippines were able to test the game. Additionally, it was only available for Android users only.

Although the Alpha test only lasted for around one month, after that Riot hardly shared any official announcements regarding the Wild Rift. Nevertheless, they did start taking pre-register for global testing on Android, and a lot of players who tested the game on the Alpha period reported a couple of updates on the play store as well.

And now after Android, Riot has officially announced that they are taking beta testers for the iOS users as well.

Android users can pre-register for the Beta test directly from the play store. Simple pressing the Pre-register button can get you the chance to test the game when available.

In the latest tweet, Riot has announced that iOS users can now also Sign up for the beta test by entering their email on wildrift.leagueoflegends.com.

When the beta test is going to release?

The release date of the beta testing is yet to be announced. However, we can expect to see the beta to go live in the coming months.

“We are going to run limited alphas and betas in select countries starting soon,” Riot Games said on the Wild Rift release. “The plan is to have the mobile version fully live in most regions by the end of 2020, with console coming sometime after.”

Comms lead of Wild Rift, Ben Forbes also mentioned, “No details on when/where they might be just yet! We know there’s been not a lot for iOS players to do so far, so wanted to make sure the earlybirds could register their interest.” 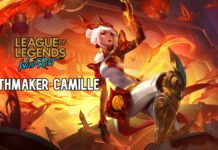