Almost every other week Riot Games introduces a new skin line in VALORANT to let players have more options to customize their play session. Each skin in VALORANT is quite unique and follows a certain theme.

The next skin line in VALORANT will be called Origin. As the name suggests, the overall theme has a Magepunk aesthetic. There are floating lines around the weapon to make it stand out from other skin bundles. Furthermore, certain part lights up and protrudes out of the main body during equip animations.

Also, the melee is similar to the Celestial skin bundle. Based on the early preview, there seem to be multiple recolors of this skin line available for players to customize.

The origin skin bundle will feature skins for weapons like Vandal, Frenzy, Operator, Bucky, and the melee.

As it is a premium bundle, the whole bundle costs 7100 VP.

The Origin bundle will be available in the VALORANT’s in-game store on June 10th. 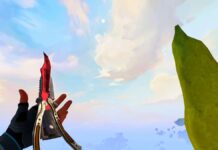