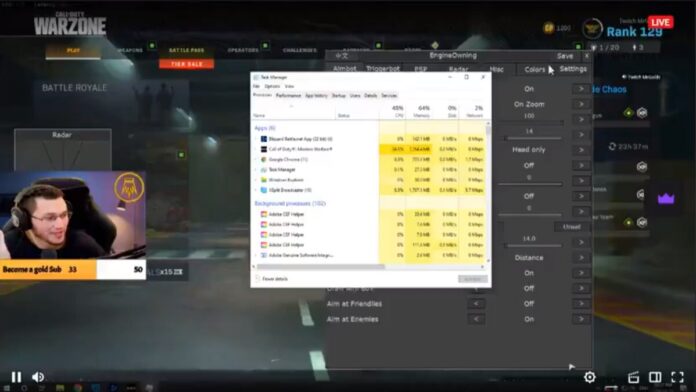 Twitch streamer ‘MrGolds’ accidentally shows his cheat menu on stream while bragging about his skill in Warzone.

Call of Duty: Warzone has to be the biggest battle royale game at this moment attracting millions of players. And with the recent Call of Duty: Black Ops Cold War’s reveal the hype around the CoD franchise is skyrocketing. However, with so many players, it is also pulling countless players who prefer to cheat/hack for their own satisfaction.

But in recent times it got even worst. While some popular streamers like NICKMERCS, TimtheTatman brings thousands of players to their stream because of their skill and personality, one group of Call of Duty streamers are cheating live on their stream to falsely show off around their viewers. Just a couple of weeks ago CoD streamer ‘Twistedbear’ caught red-handed while cheating and even got banned for it.

And now, another Call of Duty streamer named ‘MrGolds’ who has over 77k followers on Twitch is under fire for cheating as a clip shows him using an EngineOwning cheat menu while playing Warzone.

So, what happened here is, his viewers were accusing him of cheating in Warzone because of his suspicious gameplay. And replying to his viewers he was defending himself by saying he is just good at the game and not cheating.

“Just because I have good recoil, I’m good at the game, is it the first time you see someone good at the game?” his replied. “Have you ever seen anyone playing like me, like seriously?”

Well, at the time he was bragging about his skill, he completely forgot that he left the EngineOwning cheat menu visible in the screen behind the task manager. And after realizing that he went silent for the rest of the clip and at one point he said “oh my god man!”

As the EngineOwning is known for offering cheat software for various multiplayer games, Twitter went ham on MrGolds for cheating live on Twitch. Another streamer TGDefinition tweeted out saying that “I can’t believe there’s people like this guy using EngineOwning, one of the most common obvious hacks & he doesn’t get shadowbanned or even banned in general, nor does he get suspended on Twitch.”

MrGolds however declined all the allegations and he is streaming on Twitch like nothing ever happened. He is now even banning everyone from his chat if anyone brings out the topic. Update: He is now banned from Twitch.

Twitch and Infinity Ward have banned steamers for showing cheats live on their stream before, but regarding MrGolds they are yet to take any actions.