Amouranth recently claimed that she made more than 1 Million USD in the last month alone.

During her Hot Tub streams on Twitch, Amouranth managed to quadruple her follower count in the span of a few months. Currently, Amouranth’s Twitch channel has more than 3.84 Million followers which is one of the biggest on the streaming platform.

Back in May of 2021 Twitch disabled ads on Amouranth’s channel without notifying her even though she is a partner and has good standing with the platform. But later, Twitch decided to remove the demonization from her channel.

After Twitch opened a new category called “Hot Tubs and Beaches”, Amouranth and some other Hot Tub streamers decided to move to ear-licking ASMR streams. She is still doing very well as proven by a recent Podcast appearance where she talked about her earnings.

During a recent H3H3 podcast, Amourant was invited as a guest. At one point during the podcast, Amouranth talked about her earnings. She said, “Last month was actually my highest month ever”. This refers to the past month of June.

Then the host of the show Ethan asked Amouranth if she will be revealing how much she made. To which Amouranth’s answer was, “1.1 Million last month”.

Amouranth’s 1 Million is probably not from Twitch streams alone as she has other sponsors and even a successful YouTube channel as well. 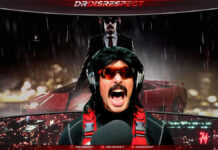