Ubisoft is introducing yet another Yakuza crossover skin to Rainbow Six Siege.

Rainbow Six Siege has already brought a lot of fun crossover skins over the past few years. While some fans might not like the artistic direction of these crossover cosmetic items, they still look quite unique and gets the fans excited.

Earlier this season, Ubisoft introduced two Yakuza-inspired bundles for Echo and Hibana. The Echo skin was based on Kazuma Kiryu, while Hibana was on Kaoru Sayama. And now Echo is getting a new Elite set, which Yakuza fans would love to see.

Players will be able to purchase Echo’s Majima Goro Elite Bundle from the in-game shop for 1800 R6 Credits. 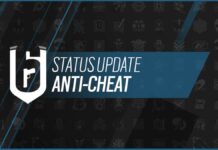