Ubisoft is back with yet another limited-time game mode for Rainbow Six Siege called ‘M.U.T.E Protocol: Flesh & Metal’.

“We are back at the M.U.T.E. Comm Tower so get ready for the new game mode: Arms Race to the Objective. Your mission: upgrade your weapon after each kill but be careful: it will downgrade if you get taken down. Be the first to reach the last upgrade, the Ultimate Golden Hammer, and smash the Brain to grant victory to your team!”

Respawn is enabled for this event! Although there are two different factions, the gameplay will be symmetrical: no attackers and no defenders. Every Operator has the same loadout and abilities: a primary weapon that gets upgraded after each kill and the new Power Dash ability, which enables you to destroy soft walls when rushing through them.

Choose your side between robotics and organics and battle to win this epic Arms Race!

ARMS RACE TO THE OBJECTIVE

At the start of each round, Attackers start with Smoke’s FMG-9 and Defenders with Mute’s MP5K. After each kill, your weapon gets upgraded until you reach the last tier: the Golden Hammer, which is the only weapon that can destroy the objective. However, after each death, you weapon gets downgraded. There are 10 weapons in total so be ready to quickly change your playstyle!

The first Team who destroys the Brain Case with the Golden Hammer takes the round!

The match is a Best of 3 where each round is played at a different floor in the reskinned M.U.T.E. Comm Tower.

M.U.T.E. Protocol: Flesh & Metal brings a brand new collection which contains uniforms, headgears and weapon skins for all Operators available to play during the limited-time event.

We are also bringing back the original M.U.T.E. Protocol collection from Year 5 with all its former content. And if you purchased one or several bundles from this past event, we will grant you the corresponding Operator Card for free.

The M.U.T.E. Protocol: Flesh & Metal event starts tomorrow, August 2nd, and will continue until August 23rd. So make sure to drop in and try it out for yourself. 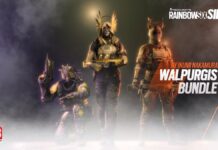