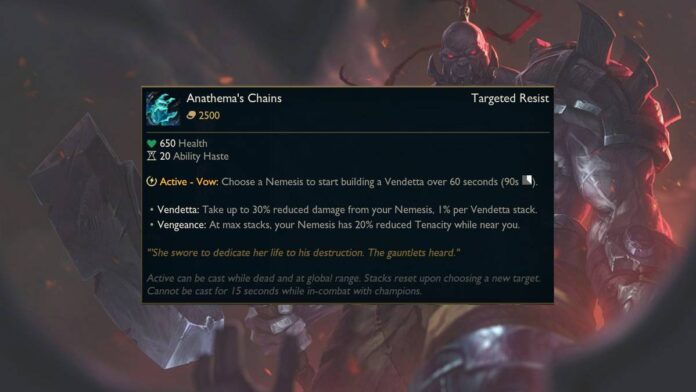 Earlier this month, Riot Games confirmed that they are currently working on two new items and one heavily reworked one. In the meantime, Riot has already confirmed the new AD item Hullbreaker that is replacing Sanguine Blade.

“The item grants damage reduction against just that targeted enemy, as well as a tenacity reduction aura against them if you’re close to them,” Riot previously said about Anathema’s Chains. “This item should be fantastic for dealing with a fed carry or single-threat team composition, as well as matching a threatening split pusher.”

‘She swore to dedicate her life to his destruction. The gauntlets heard.”

Active can be cast while dead and at global range. Stacks reset upon choosing a new target. Cannot be cast for 15 seconds while in combat with champions.

The Incident in Gen.G Headquarters in Seoul

OMG On The Verge Of Making Playoffs After 4 Years