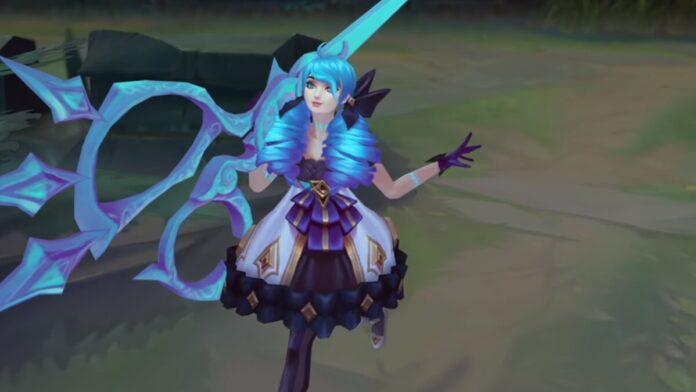 Now, after all these speculations, Riot Games has officially revealed League of Legends 155th champion Gwen. Even though everyone assumed that the new champion will be Isolde, but from the new teaser named “Gwen Champion Teaser: Made With Love” it seems, the tailor-made for top lane champion is going to be called Gwen.

Gwen, the creepy doll in the teaser is actually part of Isolde. Based on the lore, Gwen is the doll who is made by Isolde before she knew Viego, and later on, a part of Isolde’s soul possessed the doll and gave her new life.

Gwen will be released on the Summoner’s Rift on patch 11.8, Thursday, April 15, 2021. She will be available for testing in the LoL PBE in the next few days.

Gwen’s abilities are out. Here’s how her abilities look like:

Gwen’s basic attacks deal bonus on-hit magic damage based on a percentage of her health. Basic attacks against champions will heal her for some of the damage dealt.

Gwen rapidly snips her scissors between two and six times, dealing magic damage in a cone. At a minimum, Gwen will snip twice, adding one snip per basic attack Gwen has landed on an enemy (up to four for a total of six).

Enemies in the center of each snip take true damage, as well as the bonus magic damage from Thousand Cuts.

Gwen spins up the Hallowed Mist to surround her for five seconds, gaining some armor and magic resist when in it. Enemies outside the Mist cannot target Gwen or hit her with any abilities. The mist will move to follow Gwen the first time she tries to leave it!

Gwen dashes a short distance and empowers her attacks with increased range, speed, and on-hit magic damage for four seconds. Attacking an enemy during this time refunds 50% of this ability’s cooldown.

Gwen can cast Needlework up to three times but needs to hit an enemy within 8 seconds to unlock each subsequent cast. Each cast fires needles in a line that deals with magic damage, slow enemies, and apply Gwen’s Thousand Cuts bonus magic damage.

Who Will Secure The Last Spot For the LEC Summer Split...

Drafting in Professional League of Legends