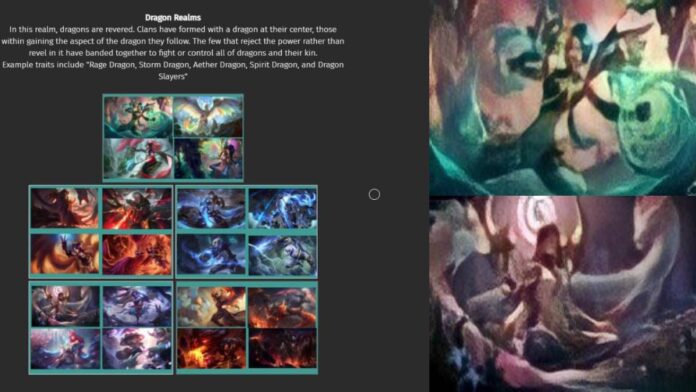 A new leak reveals possible Dragonmancer Kai’sa and Karma skins ahead of its announcement.

Dragonmancers are one of the most popular skin lines in League of Legends that is set in an alternative universe where champions are granted the powers of dragons. Since its introduction last year, Dragonmancers skins received a massive response from the League community.

Although there was not much information about the 2021 edition, there’ve been some rumors surrounding the Dragon skins’ comeback. In patch 11.19 PBE, Riot added a Dragonmancer Kai’sa emote that strongly suggests the skin line’s return in League of Legends.

After that, some datamined content has also been found that revealed Dragonmancer Volibear skin with a Prestige edition. Moreover, it also reported that there will be 10 new chromas and 5 new borders for the Dragonmancer 2021 skins as well.

Now to make those speculations even stronger, Riot recently did a survey on TFT with some players that allegedly leaked the upcoming Dragonmancer Kai’sa and Karma skins.

Although the skins are blurred, here are the leaked skins:

The exact release date of the skins is yet to be revealed. However, there’s a chance that Dragonmancer Kai’sa and Karma along with the Dragonmancer Volibear skins will release on patch 11.21.

Which team has the longest losing streak in professional League of...