Best R-301 Skins in Apex Legends 2021: Ranking All the Skins from Worst to Best

Here we’ll rank all the R-301 skins that Respawn has released so far in Apex Legends.

Respawn Entertainment, the developers behind the popular Titanfall franchise of video games entered the highly competitive battle royale genre with Apex Legends. As Apex is set in the same universe as Titanfall, many of the original weapons also made it into the battle royale mode with slight alterations.

For example, the R-301 is a direct successor to the R-101 and R-201 which were available in the Titanfall games. Also, Apex being an online free-to-play FPS game means players don’t have a barrier to entry to enjoy this polished shooter.

As such, players are given many options in the cosmetic department to customize their play sessions. Consequently, players can purchase skins and other goodies using real-world money to show support to the developers.

Following the release of Apex Legends back in 2019, the R-301 slowly cemented itself as the best assault rifle in the game. Its high rate of fire paired with ease of control made it the default choice for players of all skill buckets.

Despite receiving multiple changes over the years, it still has a dedicated userbase even in season 10. In its current state, it is literally a laser beam. As this weapon is really popular, Respawn showered it with amusing-looking skins.

How Many R-301 Skins are there in Apex Legends?

Now we’ll rank every single one of the Legendary R-301 skins that Respawn has released so far in Apex Legends and put them into three distinct categories such as S-Tier, A-Tier, and lastly B Tier.

Lastly, there are B-Tier skins. To put it simply, they are just average when it comes to all the legendary R-301 skins in the game. Also, we take rarity and dope-looking colorway into consideration while ranking these skins.

Similar to every other skin tier list, this one is extremely subjective. This list is an ideal guide for newcomers as well as returning veterans who are looking for some sick-looking R-301 skin recommendations.

Right now, so far in season 10 of Apex Legends, Respawn has released quite a diverse collection of legendary skins for the fan-favorite R-301. As the current state of the weapon is really good in almost all scenarios, some of the skins of this assault rifle are really sought after by the community. Here we’ll showcase 10 of the best R-301 skins in a worse to best order, according to us.

The Pure Performance skin was a recent addition to the collection. And it was released alongside the Aftermarket collection event. It featured a retro-looking light blue and red colorway. Following its release, it cemented itself as one of the fan-favorite R-301 skins in the game.

Honored Prey was part of the very first battle pass skins in the game. It was released alongside season 1 of Apex Legends. Matching the theme of the first battle pass, Respawn went all out for this savvy-looking R-301 skin fit for a hunter. Later down the line, Respawn even released a yellow recolor of this skin with the Old ways collection event.

Intelligent Design is a red recolor of the base Unsheathed legendary skin. It really stood out from the other recolors mainly due to its unique red colorway. Also, this variation of the R-301 skin is really clean looking with a Japanese samurai armor aesthetic.

The Pale Moonlight is a recolor of the Daybreaker base legendary skin. It features a dark blue colorway that made it an instant hit among the Apex community. As this is a pretty rare R-301 recolor, it is really sought after by the Apex player base.

Fun in the Sun R-301 skin was released alongside the System Override collection event in the game. It featured a really unique yellow and light purple color theme which really caught the attention of the player base. Also, this skin had a pretty bulky-looking design aesthetic with all those tubes running alongside the side of the weapon.

In the Threelseekers event, Respawn introduced the Tried and True skin for the beloved R-301. Unlike most other skins of this particular weapon, it featured a unique rusty look. Unsurprisingly, the blue and gold colorway paired with wood texture on the tail end of the weapon made this skin variant an instant hit among the Apex player base.

An Anger Righteous skin came out alongside the Chaos Theory collection event. Respawn really went all out on this variant of the R-301 skin. It features a solid gold and blue colorway with a little hint of white. Also, the face mask on the side of the weapon certainly gave it a creepy vibe.

This one is a recolor of the original Dynastic Cycle R-301 skin. Unlike the base legendary skin, this one has a really cool-looking blue and purple colorway. While the base skin is pretty good, this purple and blue colorway definitely made it stand out from the crowd. As such, this variant of the R-301 skin is highly sought after by the community.

Respawn Introduced the Ice Cold Variant of the R-301 skin back in 2019 as part of the holiday-themed Holo-Day Bash collection event. This R-301 stood out from the crowd of other legendary skins mainly due to its gold and blue colorway. It definitely embodied the spirit of the holiday.

The Golden Rampage was the reactive battle pass exclusive skin that was released back in season 2 of Apex Legends. Due to the rare nature of this battle pass skin, this along with its other recolor aptly named “Iron Rampage” is highly sought after by the Apex community.

It features a really unique-looking gold colorway on top of having a Rhino skull as its tip. And similar to all the other reactive battle pass skins, it reacts to you getting a kill during the game. Suffices to say that, this is by far the best R-301 skin in the game.

Unfortunately, this skin won’t be available to purchase again as this was a battle pass exclusive skin. But that will change starting season 11.

Will past R-301 event skins ever return?

Unfortunately, the past battle pass-specific R-301 skins will not return to the storefront ever again as they were an exclusive reward for that particular season. However, other recolors and event skins might return in the form of a recolor. But moving forward, Respawn has stated that battle pass skins from season 11 and onwards might return to the store in an event-specific skin bundle.

As of writing, there has been no new update regarding any upcoming R-301 skins in the game. We’ll definitely highlight more R-301 skins as soon as they get announced or leaked.

Apex Legends players are not happy with the new Halloween store...

Best Flatline Skins in Apex Legends 2021: Ranking All the Skins... 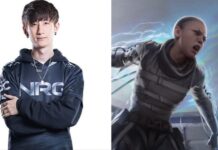 NRG “aceu” thinks nobody will play Wraith in Apex Legends after...