Best Apex Legends FOV Settings to Use in 2022

Apex Legends is an FPS battle royale game with a thriving competitive scene. As it is an FPS title, new as well as old players are often confused regarding which FOV(field of view) settings they should use in order to get an edge over their opponents.

At first, let’s go over what is FOV settings and how can it give players a competitive advantage while playing first-person shooter games. Basically, FOV is a short form of “Field of View”.

In short, FOV indicates how much of the game world a player can see on the screen at the same time. And it holds true for Apex legends as well. Usually, in FPS games, the developers provide a FOV slider that ranges somewhere between 90-120.

Why is FOV so important in Apex Legends?

Since Apex Legends is a battle royale game, information is key here. Getting information regarding your opponents in an FPS game could mean the difference between winning that gunfight versus losing the match altogether.

As such, a higher FOV setting is usually the better choice for a competitive edge. Although we also have to keep performance into consideration while choosing the FOV settings as having more things to display could negatively affect FPS.

In short, figuring out the perfect FOV setting in Apex Legends is a balancing act between performance and visibility. Just because you can crank your FOV to 110 doesn’t mean you should. However, if your PC can handle it, most pro players usually choose 110 as their preferred FOV setting.

Unsurprisingly, there are some outliers who use 100 on their FOV slider or even less to get a tunnel vision type of effect. At the end of the day, it really comes down to personal preference.

Having said that, these are the settings we would recommend based on the performance of your PC.

Can you adjust FOV settings in console version of Apex Legends?

Unfortunately, console players don’t have the flexibility to play around with the FOV slider in the game as their PC counterparts. However, as Respawn is still working on a next-gen update for the PS5 and the Xbox series X, there is a chance they might introduce a customizable FOV slider for players to customize their visibility in the game. 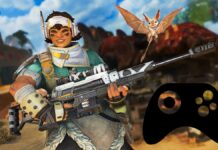 Respawn Decided to Nerf “Heat Sink” Ironsight, But What About “Pay-to-win”...