The official release of Apex Legends Mobile is right around the corner, and Respawn decided to reveal the details for the exclusive Legend called “Fade”.

Apex Legends Mobile is set to release officially on May 17th, 2022, with lots of new features and content. Previously, it seemed like Apex Legends Mobile would follow the footsteps of the PC version and release the existing contents with a different style.

Ignacio Huamani, AKA Fade, was the youngest family member of military tech hunters. The family made a livelihood by selling recovered weaponry to the highest bidder. Being the youngest, Ignacio had a hunger to prove himself to the family by showing he could contribute more.

Blinded by the eagerness to prove himself, he made some bad decisions by contacting a mysterious client who he made a deal with about acquiring a suit. Little did he know, it was a trap set for him and his family, which eventually led to the death of his whole family.

The suit had special abilities, which propelled him to a different dimension. After that, Fade went through struggles and hardship, but he eventually made it into his dimension, seeking justice and redemption in the Apex Game for his family’s cruel fate.

Fade is a soldier with red and silver armor with gold highlights. The mask of Fade looks like a skull with red armor on the forehead and cheeks. His description and background match very closely to Revenant, who is already in Apex Legends. But, unlike Revenant, Fade is a human with blood and flesh.

Fade will enter the Apex games with the official launch of Apex Legends Mobile on May 17, 2022. 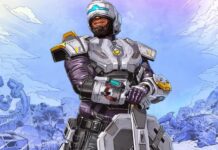