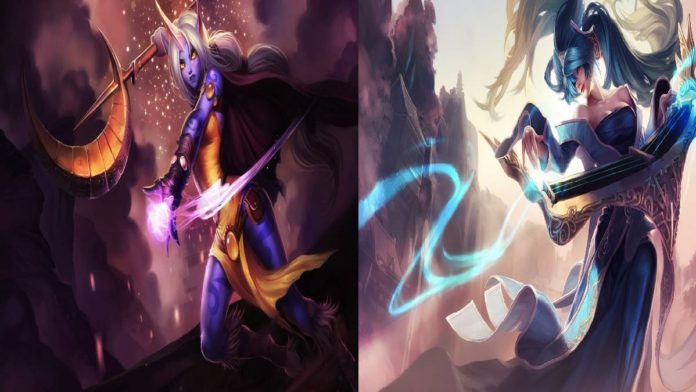 League of Legends’ support champions Sona and Soraka currently hold the highest and third-highest win rate with 59.85% and 55.77% win rate at the Top lane. Even Pro players are abusing them in the solo queue.

According to lolalytics, Sona currently holds the highest win rate in the Top lane with a massive 59.85% win rate and Soraka holds the third-highest win rate with 55.88%, only behind Sett. With Sett’s nerf in the patch 10.3, Soraka might dominate both Top and Bot lane.

Many pro players like TheShy, Hauntzer, Impact, Bwipo are playing Soraka top lane and winning. And pros like Zven, Bang, Viper, Ruler are using Soraka as an ADC and having good results. In week 2 of LEC G2 Wunder used Soraka in the top lane against Vitality and won the game.

In patch 9.9 Soraka got a buff which allows her to get more self-healing, ally healing, and movement speed which helps her to lane bully. As pointed out by Shakarez, Soraka does not play to win the lane rather play to go even or survive the laning phase. After level 6, Soraka does a similar job to Gangplank where she looks for R.

In the mid to late game, she gets more gold than she could get from supports and supports items being cheap she becomes a nightmare to face against without any kind of heal reduction.

Soraka bot is also similar to the Soraka top. You become AP threat in the lane and with supports like Rumble and other damage dealers she is not bad in the bot lane. As mentioned earlier many Pros are playing her in the Bot lane as well.

Why Sona is being played in the Top lane

Sona top is kinda similar to Soraka top but unlike Soraka you do not stay in the laning phase. Sona currently holds the highest win rate in the Top lane with a 60% win rate.

Darkdog made it to Challenger in the EUW server playing Sona in the Top lane. He recently pointed out in the Reddit why his strategy works even in the high elo.

For the early game he said, “Your main goal in the early game is to poke your opponent to generate gold, if they get low enough you can also proc dark harvest, and in some matchups, you can even kill with ignite. However, our goal during lane is mainly to get to level 6”.

After reaching level 6, “At this point, you should have at least 1000 gold – enough for Kirchei’s and boots at a minimum. At level 6 our goal changes. Our lane does not matter anymore, You want to be roaming as much as possible and trying to get fed off other lanes and securing dragons. With this strat, we are essentially open-top”.

For the Mid game, “The rest of the game plays out similarly to any other game of DH Sona Support – Look to burst squishy targets and group up as much as possible. Odds are the enemy toplaner will be pushing top so use ur numbers advantage elsewhere (just don’t forget about his TP).”

Late game, “Late game is exactly the same as DH Sona Support. It’s hard to write a full guide on this part as it varies massively from game to game but make macro plays happen, look for picks, kill enemy nexus.”