The hype and excitement surrounding GTA 6 grow larger every day. GTA 5 has been Rockstar’s most successful GTA to date, as it has sold a whopping 170 million copies worldwide since its release in 2013. And thanks to GTA Online, GTA 5 remains relevant even today. However, fans have been eagerly waiting for the next installment in the Grand Theft Auto franchise, and it seems like we finally have some clues on what to expect!

According to the leaks, which were initially posted on GTAForums, GTA 6 will be the first-ever installment in the franchise to feature a female protagonist, Lucia. The other main character of GTA 6 is allegedly named Jason, as both the protagonists’ names appear on the dev menu.

Moreover, the leaks also allegedly confirm the return of Vice City and its famous establishment – Malibu Club. Not only that, but the game will also likely feature a new team called the Vice City Mamabas. Furthermore, a new area called Port Gellhorn has also been rumored to be added. Regarding gameplay, players can now allegedly pick up guns from the floor and switch between the hands they wish to wield their weapons.

The leaked gameplay, which shows Lucia in action, has allegedly been recorded on PC and PS4.

The leaked gameplay also showed a list of several World Events. These events are further categorized under Permanent events and Ambient world events, which might function similarly to what we’ve seen in Red Dead Redemption 2. Some of the events that can be seen in the leaked gameplay footage are titled: Lucia’s Friends, Bonnie and Clyde Mysteries, Abandoned Hovercraft, Lost At Sea, and more.

The GTA 6 leaked screenshots show a glimpse of a newly reimagined Vice City and the two new protagonists, Lucia and Jason. According to leaks, the female protagonist is likely to be voiced by Voice Actress Alexandra Cristina.

Although we have seen all the footage and screenshots there is to see, they all still look like early-stage models and definitely not the final product. Since we don’t yet have a release date, it is highly likely that GTA 6 will be subject to multiple design changes during its development, and the finished game will look very different.

The hacker who leaked the gameplay footage and screenshots allegedly leaked the game’s source code as well. Although their motives are unknown, this leak is sure to affect the game’s release date. Rockstar has not yet commented on the leaks, but it is most likely that they will face a lot of internal delays, resulting in pushing back the release date for GTA 6 to focus on damage control. 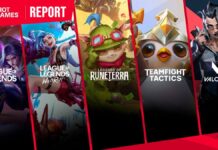 How Does Riot Games’ Report System Work in VALORANT, League of...