Ubisoft has finally released the first elite skin for Rainbow Six Siege‘s Iana, and the fans are really excited about it.

Rainbow Six Siege has once again collaborated with Square Enix to bring the Iana YoRHa NieR:Automata elite skin. Watch the reveal trailer below.

Leaked a few weeks ago, the elite Iana skin was one of the most anticipated cosmetic items in Siege. While many might think the new skin features 2B from Nier:Automata, it actually is not as confirmed by Neir icon Yoko Taro. “I had a costume collaboration with Rainbow Six. I think you can play G2 instead of 2B,” he writes.

Earlier this week, Ubisoft also announced the Maverick replicant bundle, where Maverick was cosplaying Brother Nier. And now the second part of the Nier crossover is here.

The Elite Iana YoRHa and Maverick Replicant bundles are available now in the Rainbow Six Siege in-game store, and they can be purchased with 2160 R6 Credits each. 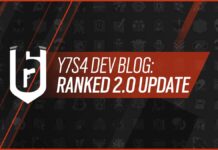