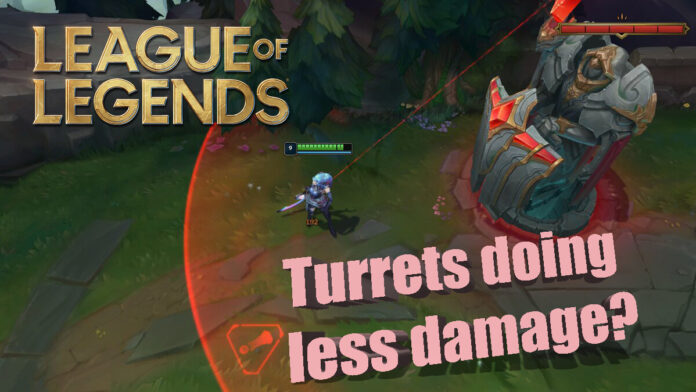 League of Legends Turrets have been doing less damage since Patch 12.14.

Turrets, also known as Towers, are a core component of League of Legends. These are stationary statues that attack enemies on sight. They provide vision and are your main form of protection from an enemy attack.

There are three Outer turrets, three Inner turrets, and three Inhibitor turrets in each lane. There are also two Nexus turrets protecting the Nexus. To reach the Nexus and win the game, one must destroy most of the enemy turrets. Moreover, the turrets can provide a fair amount of gold, which makes it a good incentive to destroy them.

The turrets do single target damage and lock on to the first enemy in range. If an enemy champion within range deals damage to an allied champion, the turret will change targets to that enemy champion. But if the turret is already targeting another champion, it will not switch target.

The turrets also offer good protection to the player and deter the enemy player from killing you. An enemy champion, if they are strong enough, can sometimes dive and kill you under a turret. However, to stop frequent turret dives, Riot has given a unique passive to each turret that increases turret damage each time an enemy takes a turret shot.

But now, according to Vandiril, a League of Legends content creator, a bug has caused turrets to do less damage since patch 12.14 and has not been fixed in the newest patch, patch 12.15.

What is the Turrets Bug?

According to Vandiril, turrets have not been working properly for the last 8+ days. Turrets Unique Passive – Warming Up is currently not working as intended, resulting in less turret damage.

For the past few days, turret ramp-up damage has remained at only 40 percent instead of 120 percent. This has made successful turret dive and turret taking quite a lot easier. The champions that rely heavily on the turret for protection in the laning phase have suffered mostly because of the bug.

Although this has affected chiefly top laners, this also made some junglers quite strong. The bug is also negatively affecting the game’s balance and players’ enjoyment.

This not only negatively impacts Normal-play but also has impacted professional play. The bug occurred quite recently in an LPL match.

There’s still no fix from Riot Games yet, and we hope Riot will fix the bug soon. For more information regarding League of Legends, follow us on Twitter and Facebook.