Raiden Shogun/Baal and Kokomi banner release dates have been revealed thanks to a recent Genshin Impact leak.

Currently, some of the most hyped-up characters coming to Genshin Impact are Electro Archon Raiden Shogun, Kujou Sara, and Kokomi. Among these Raiden/Baal and Kokomi are 5* characters while Sara is a 4 star.

These characters have deep significance to the story so many players are eagerly waiting for these characters to come out. Recently a Genshin Impact leaker revealed the possible release dates for these aforementioned character’s banners. 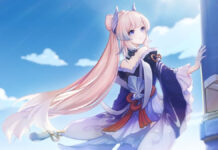