The Crew Pack is a monthly subscription service in Fortnite costing $11.99/month that grants multiple rewards per month. The rewards include a new skin, current season’s battle pass among other rewards. It is a very lucrative reward for Fortnite all Fortnite players.

The skins in the Fortnite Crew pack are exclusive to the monthly subscription and are some of the most unique outfits in the game. Recently Epic Games revealed the Fortnite December Crew pack skin and additional rewards. The December Crew Pack skin is going to be Cube Assassin. Yes, the same Cube Assassin that was a miniboss in the recent Fortnitemares 2021 Horde Rush LTM.

At that time, many Fortnite players wondered about the date of the Cube Assassin skin’s release. But Fortnite decided to make it part of the December Crew Pack rewards.

The Fortnite December Crew Pack has the following skins and accessories-

All of the reactive styles for the skin and accessories can be turned off except for the weapon wrap. The weapon wraps reactive function activates only when firing.

Below is a video showcasing the Fortnite December Crew Pack skin and accessories in the locker.

“For every month you’re an active Fortnite Crew subscriber, you’ll unlock a new Stage of the Fortnite Crew Legacy Set for up to six total Stages. The Stages unlock on the 14th of each month during your subscription (at 8 PM EDT / 7 PM EST).”

Crew Pack subscribers always get instant access to the current season’s Battle Pass. But players who already bought the Season 8 Battle Pass will get a one-time 950 V-bucks.

Crew Pack subscribers also get 1000 V-Bucks every month on the day of the billing date.

For more details about the Fortnite Crew Pack, read the Official Blog Post. 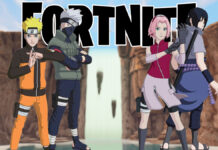