VALORANT: How to Climb from Iron to Bronze 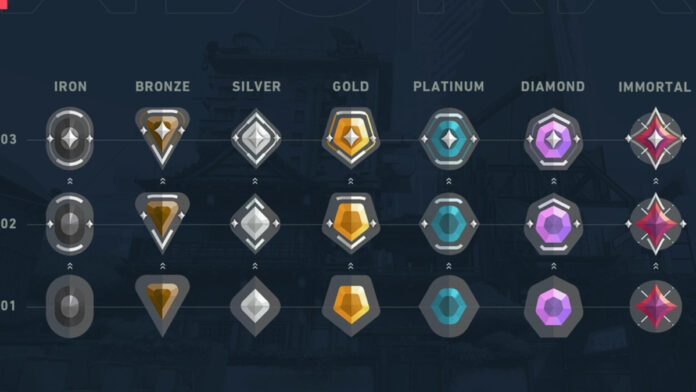 VALORANT’s rank ladder is designed to assess the overall skillset of a player. Without proving your maximum potential, ranking up will be difficult.

As of Episode 3, VALORANT has 22 rank levels and ten specific ranks. Starting from Iron, the rank pyramid ends at Radiant. In today’s guide, we will focus on the lower sphere of the rank ladder. Iron basically means you have just started playing the game, or you are new to the FPS genre overall. Besides that, Iron also means that you, as a player, need a massive improvement in terms of gameplay & everything related to the game.

Read More: Best Pistol in VALORANT 2021: Ranking all the Sidearms from Worst to Best

The rank Iron is generally known as a “Low-Elo” rank, and it reflects a player’s skill accordingly. Often, it means that the player is either lacking communication skills, aim, proper equipment, game sense, or all of them at once. According to Riot’s own dataset from Episode 3 Act 1, 14.4% of the players were placed between Iron 1 to 3. Compared to the statistics of other ranks, the Iron player base isn’t small by any means.

The Challenges in Iron

Being an Iron could sometimes be very challenging since it’s extremely hard to get good teammates. Winning a game of VALORANT requires decent teamwork & communication, but finding such sensible teammates is almost a matter of luck in Iron. In this case, it’s best to develop a leadership mentality to lead whatever teammates you end up with. If that’s not an option, five stacking is always a better alternative as it also boosts communication skills.

Iron 3 being the “Elo Hell”

As Iron players often lack basic game sense and experience, it’s quite common that you might face bizarre situations in ranked matches. Alongside these challenges, the presence of smurf players can also make the situation difficult. The rank Iron 3 is quite synonymous with the phrase “Elo Hell”; which means you are either stuck on a certain or a very low-elo and unable to rank up.

Best Ways to Climb from Iron to Bronze

Building a smooth & sharp aim is crucial. Generally, it’s not required to have a lighting fast reflex or highly accurate aim, since your opponents won’t pose that much of a threat in Iron. But, it’s important to sharpen your aim by practicing in the Range or Aimlab. To become consistent with your aim, you also have to be consistent about your aim training routine too. Iron players often tend to jump into competitive matches without any sort of warmup, causing themselves to drown in confusion about their low performance later on.

It’s best to avoid these malpractices and start focusing on consistency when it comes to warmup or aim training. Aside from the Range or Aimlab, playing deathmatch before ranked games are highly recommended. It builds or reactivates your muscle memory, thinking abilities & sense of the surroundings in-game. Besides deathmatch, players in higher ranks sometimes hop into Spike Rush or Unrated matches for further warmups, so following that route might be useful for you too.

Developing your gunplay is necessary and it must be one particular gun. Iron players frequently switch between primary weapons every match and end up mastering none of them. To avoid such things, you must have to stick to a single weapon like Phantom or Vandal and start developing your gunplay from the scratch. Surely, buying Odin or Shotgun could be rewarding at times, but these won’t help you to build any sort of permanent skills. The recommendation stays the same in terms of Pistols too, we prefer sticking to the Ghost for starters.

Finally, mastering one single agent will definitely assist you to rank up way faster than you expect. The situation here is similar, switching between multiple agents won’t help you to get anywhere. In VALORANT, duelist agents are comparatively easier to play since their abilities are designed to benefit them in most cases. So, starting with Reyna or Jett is a good option, but make sure you are fulfilling the first task of the duelist, getting entry. Slowly, you can try out other agents like Sova, Sage, or Killjoy. Understanding the purpose of each agent is more important than learning sneaky lineups and tricks.

Although friendly fire is not disabled in VALORANT, any misplaced or misused abilities might end up hurting your teammates. Which is a big reason why we are suggesting Reyna over Pheonix in this rank. While Reyna’s Leer only blinds the enemy, Phoenix’s Curevall can even blind the teammates if not properly used. Also, Reyna gives you the option to regain health or ditch a firefight pretty easily.

If you happen to like the Operator a lot, mastering Jett early on will be useful in the long run. Besides that, playing Jett doesn’t require any high-level understanding of utility usage. So, if you possess an aggressive playstyle, Jett should be a good pick.

Other Agents to pick:

Playing Sova means you have to understand your role in the team. A Sova player must be able to utilize all of his abilities in perfect order. Since Sova’s primary job is to collect information, mastering using the Recon Bolt & Owl Drone should be your primary objective.

Compared to Sova or Killjoy on the list, Sage is pretty easier to play. Sage’s role is to support the team and hold off a very specific area of the map with her Barrier Orb & Slow Orb. Both of these abilities can make huge differences. Alongside, playing Sage would require you to constantly communicate with your teammates and heal them in time.

If Sova doesn’t match your playstyle, then Killjhoy definitely should. Just like Sage, Killjoy is also a Sentinel agent, but her abilities are lethal. Killjoy’s role is to anchor or defend sites. Her Turret, Nanoswarm & Alarmbot are effective utilities to stop incoming executes and buy time for player rotation.

Mastering Reyna will unlock many doors. Since you’ll be learning the usage of Flash very early on, it’ll be easier for you to adapt to agents like Breach, Phoenix, or Skye later on.

Playing Sage will help you understand the key concepts of teamwork. Once you get out of low-Elo and actually start to take up the role of an in-game leader (IGL), all the benefits of playing Sage will multiply your abilities to control a team.

Choosing a sensible crosshair is mandatory. It should be according to your monitor size, resolution, and comfort. If your crosshair seems to be bigger than the head of your opponent, then it’s obviously not going to work. Having a static, decent sized and good contrast crosshair is extremely important to improve in-game accuracy.

Read More: VALORANT Crosshair: Best Crosshair to Use in 2021

In summary, ranking up to Bronze will require consistency and effort above all. Since players in Iron won’t present any highly competitive environment, it’s easy to find your way through and reach Bronze.

How to Climb From Silver To Gold in VALORANT