Miss Fortune has received hotfix nerfs as her win rate spiked due to her update.

Riot Games have adjusted multiple champions in this recent patch 12.17 since the Worlds 2022 is right around the corner. One of those champions who received some significant changes was Miss Fortune.

Before her buffs, her builds were odd since she built lethality over crit. While most ADCs often opt for crit builds, Miss fortune, on the other hand, builds full lethality. People did not prefer her crit builds initially because it was too inconsistent. And with lethality builds, she maxes her E and spams it in a range, with minimal skill expression.

She was buffed in patch 12.17, and calling her over-tuned would be an understatement. Immediately after the changes, her win rate and pick rate spiked. So not only is she the most picked champion, but she also has the highest win rate. Currently, her win rate is 59.75%, and her pick rate is 23.3% in platinum+ elo.

However, Riot realized how over-tuned Miss Fortune was, so they hotfix nerfed her hours after patch 12.17 went live.

The new nerfs for Miss Fortune reverts the W buffs made in Patch 12.17.

W’s bonus attack speed is decreasing by 10% in all levels. Moreover, her W’s mana cost is also increasing from 35 to 45.

Even though these changes are focused more on her W, her Q is still strong. Because of this very reason, she will still be a strong pick in this meta. 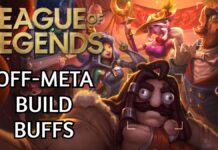