One of the most critically acclaimed games by Sony Interactive Entertainment is coming back in November 2022.

Developer Santa Monica Studio previously mentioned that they don’t intend to extend the story into a trilogy because the production and development of a game of this scale take too long.

God of War Ragnarok was initially planned to release in 2021, but last June, developer Santa Monica Studio pushed its release to 2022. Reports this week suggested that the studio moved the release of Ragnarok even further to 2023, but that is not the entire story.

According to Bloomberg, the publisher is still planning to release the game in November this year. The report said the game was delayed internally, with the title initially scheduled for September before it shifted to November. Bloomberg pointed out that Raganrok’s official release date should be announced this month, but there is no news from the developers and publishers as of today.

It is possible that God of War Ragnarok could be further delayed beyond November, but there aren’t any official announcements yet.

Digimon Survive: All Digimon Inside The Game 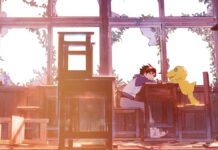 Digimon Survive: All Characters And Their Voice Actors