Blizzard has released a new premium skin for Genji to celebrate the start of the Overwatch League 2022 Summer Showdown.

The new Legendary skin is called Happi Genji, which features the Ninja in more traditional clothing. Happis are traditional Japanese coats with tube sleeves, worn only during festivals. There is usually a large design on the back of the coat, typically the name of the festival or the association participating; kanji may also appear on the lapels.

The skin features Genji wearing the traditional Happi and shorts. He has arm and shin guards on his right arm and legs. He also has what appears to be goldfish in a pouch full of water tied to his waist. Genji has a small mask on the side of his head resembling his Sentai skin.

Those who love the look of the new skin or want to complete their skin collection for Genji can check out the store to purchase this premium limited-time skin. 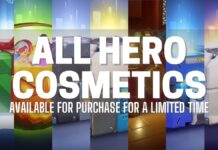