Similarly to previous seasons of Siege, the newest operator, Grim, is included in the first tier of the Y7S3 Battle Pass, and BP owners get two weeks of early access to him.

The most intriguing addition to Year 7’s Battle Pass has been the new Bravo Packs, which are only obtainable via the Battle Pass. The new Bravo Packs don’t have any duplicate items and feature a premium curated list of rewards. In addition, here, Siege players can find the rare ‘Black Ice’ skins for various new weapons.

In total, the Operation Vector Glare pass contains around 130 rewards across 100 Tiers. As we’ve stated earlier, the new intel operator ‘Grim’ is included on the first tier of the battle pass, so players can instantly unlock them by purchasing the premium track. (If you do not want to buy the Battle Pass, the new operator will become obtainable for 25000 Renown or 600 R6 Credits starting September 20th).

And just like the previous Battle Pass system, the “Operation Brutal Swarm” battle pass will follow the same multi-tier battle pass system, consisting of two tracks: the “Free” track and the “Premium” track. The Premium track of the Battle Pass costs 1200 R6 credits, while the PREMIUM BUNDLE which immediately unlocks the first 12-tiers, will cost players 2670 credits (increased from 2400).

To help you progress faster through the tracks the Premium Bonus and Battle Point Boosters are still here, and a new Daily Victory Bonus has been added for an extra boost.

During the start of Year 7, Ubisoft brought back the Year 7 pass for a limited time, and players who purchased it got access to all four Battle Pass of this year. However, the Year 7 Pass is unfortunately not available now.

Ubisoft has now extended the Battle Pass’s length to cover the whole season. So, the Operation Brutal Swarm Battle Pass will be available from September 6th through December 5th, 2022. When it concludes, all of the stuff will be gone for good, so be sure to collect everything before the time runs out. 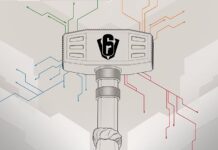