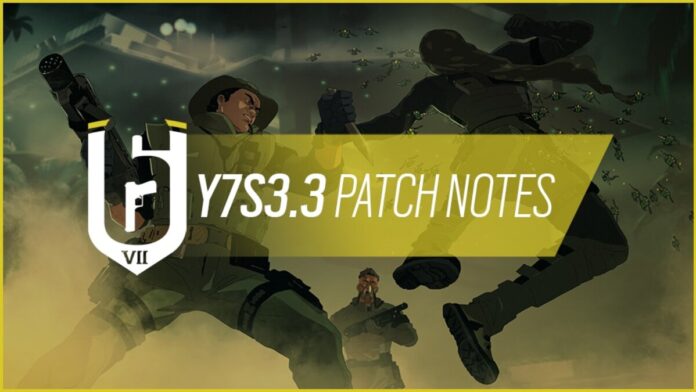 Rainbow Six Siege‘s much-awaited Y7S3.3 Mid-Season patch is here, and it brings some big changes to the game.

It has been about a month since the introduction of the Y7S3 Operation Brutal Swarm for Rainbow Six Siege, and the developers are still keeping an eye on the operators to make sure they are properly balanced in terms of strength and pick rate.

Apart from that, the devs are also introducing a new reputation tile in the main menu (below the packs tile) called the “Reputation Center”, which will display information about a player’s active penalties and their remaining duration. Ubisoft has also shared that this section will be updated in the future to display more information regarding the reputation system.

You can find the full Y7S3.3 Patch Notes below (source: Ubisoft).

FIXED – Camera gets stuck in drone view. FIXED – Operators in downed state are eliminated if they fall through a hatch. FIXED – Dot reticle remains on screen if player aims down sights multiple times at once.

FIXED – Multiple LOD issues on various maps. FIXED – Using Kiba Barrier on top of shelves in Basement Arsenal Room of Club House allows players to climb on top of them.

FIXED – Warden is unable to activate his Glance Smart Glasses during a custom session occasionally.
FIXED – Under Barrel Laser cannot be equipped on the RG15.
FIXED – Grim does not receive score points when an ally eliminates an enemy pinged by the Kawan Hive.
FIXED – Ace’s S.E.L.M.A. Aqua Breacher will attach to the opposite side of a wooden wall, but will destroy the wall as normal.
FIXED – Dokkaebi is able to use her Melee during the deployment of the Logic Bomb.
FIXED – Vigil is not receiving score points when activating ERC-7 before entering the Kawan Hive.

FIXED – Objective Markers, Operator Names, and Icons disappear the first time the spectator changes floor in Spectator Mode.
FIXED – Barricades are still visible after being destroyed if the player is joining a match in progress.
FIXED – Unmoved hostage eliminated by Goyo’s Volcan Shield will be attributed to the one detonating it.
FIXED – In Match Replay, users are unable to select drone view after using the rewind function to go back to the preparation phase.
FIXED – Crosshair Occasionally missing after spawning.
FIXED – Various UI issues.
FIXED – Various Shop and Customization issues.
FIXED – Various Localization issues.