Genshin Impact v2.8 is coming out in less than 7 days. The whole Genshin Impact community eagerly awaits the update as it will bring new stories, events, world quests, etc. The Golden Archipelago Island is also supposed to make a comeback and stay permanently.

The 2.8 update will also bring back the long-awaited Kazuha rerun Banner along with Klee and Yoimiya. The new 4* Anemo Catalyst character Haizou has people riled up because his gameplay looks fresh and fun. Additionally, Diluc and Fischl are getting skins in Genshin Impact v2.8.

The next update after 2.8 will be 3.0, and we will finally venture into Sumeru. Thanks to Genshin Impact leakers and data miners, we are already getting tons of leaks about Sumeru. Just recently, the 4 Star craftable weapons of Sumeru were leaked.

We also have the model renders of these weapons. 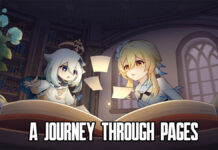