Fortnite 16.40 update added tons of new skins and cosmetics to the game files.

Fortnite 16.40 update just dropped recently and data miners have been busy finding out the new skins and cosmetic items that were added to the game files. In this update, we have 9 new skins and a bunch of emotes, backblings pickaxes, sprays, and such.

Below are all the leaked skins and cosmetics that were added to the game files in the Fortnite 16.40 update.

Below are all of the cosmetic items added to the game files in the Fortnite 16.40 update.

In this update, we have 9 new skins. Enlarged images of the newly added skins are given below. These images are from various Fortnite leakers.

The Shadow Ruby Skin will be part of the Next Gen Bundle. This skin was first leaked almost a month ago and at that time it was found that this skins bundle will be a promotional set for PS5. Meaning only PS5 users will be able to buy this skin. This information is not 100% certain as Epic still has the final say.

The Go Ape emote is a built in emote for the Beast Boy Skin. The Squad Up, High Five and Leave Squad emote are probably for use in the new No Escape LTM to team up with other players.

The Tea Time emote can be seen below.

The first backbling is for the D’ugh skin, 2nd one for Beast Boy, 3rd one for Etheria, and the 4th one for Lyra.

Three new loading screens were added in the new update. The first loading screen is apparently being granted to all Fortnite Crew Pack owners.

Fortnite skins bundles are a common thing now in every update. In this update we have 4 new locker bundles from prop players and content creators along with two new shop bundles.

In the 16.40 update, a new umbrella was added. This new umbrella is the reward for winning the upcoming Impossible Escape LTM.

Read More: How to Get Free Rewards by Participating in the Fortnite Lantern Trials Event 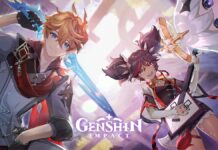 How to play VALORANT Breeze map: A Complete Guide

Back 4 Blood: How To Play Jim