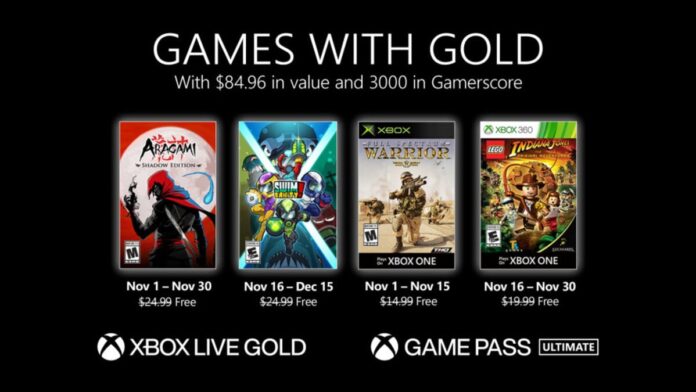 Xbox has finally announced the Xbox Live Games with Gold for November 2020 and it features different genres of games. Additionally, November means the month where Xbox Series X|S comes out. Hence, which means these games will also be playable on the next-gen consoles; with minor upgrades.

Read more: All the games releasing in November 2020

As it has been like recently, Games with Gold will offer 2 Xbox One titles, one OG Xbox title, and one Xbox 360 title. All of it can be played on Xbox One as well as Xbox Series X|S.

The Xbox Live Games with Gold for November 2020 are:

This month’s Games with Gold selection are quite enjoyable, especially Lego Indiana Jones. Full Spectrum Warrior provides a nostalgic playthrough of tactical, realistic military shooter, one of a kind for its time. Both Aragami and Swimsanity! are fun additions to one’s collections. In addition to the addicting gameplay, the games serve up well for both hardcore and casual gamers alike, of all ages.

Aragami Shadow edition contains also the prequel. A refreshing stealth game with unique gameplay. So it is a recommended title from us.

Swimsanity is best suited for casual couch multiplayer for the whole family.

Furthermore, except for the Og Xbox game, the other 3 Xbox Live Games with Gold games offers much to grind for achievement hunters. Providing 3000G in gamerscores.