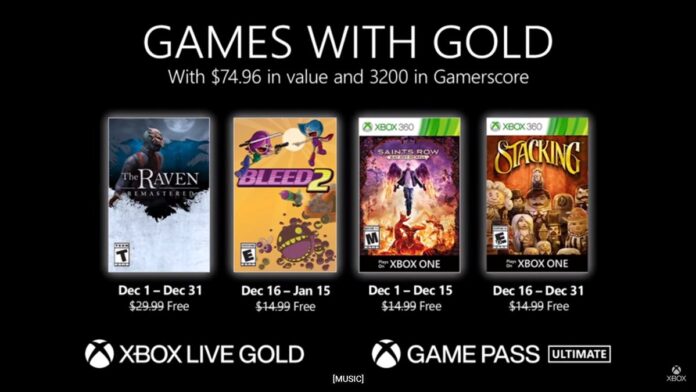 Xbox One and now including Xbox Series X|S’s lineup for December 2020’s Games with Gold offers some exciting and addicting games. Including a murder mystery game inspired by the classic detective thrillers. Furthermore, December’s lineup will be having a fan-favorite title from the Saint’s Row franchise.

The list of games coming in Xbox Live Games with Gold for December 2020 are:

The Raven Remastered is a remaster of the classic puzzle game, coming from the creators of the Book of Unwritten Tales. Journey through 1960s London to catch the mysterious Raven. Moreover, Saint’s Row Gat of Hell will let players play as Johny Gat and Kinzie Kensington as they tear through the hellish underworld. Of course, in the signature Saint’s Row gameplay.

On the other hand, December’s Games with Gold will also be adding Stacking, a 3D puzzler, and Bleed 2, a fast-paced action platformer.

Although this month’s addition is not filled with AAA titles or big names, the selection is still quite enjoyable to play through. Additionally, now Game Pass Ultimate not only provides access to Xbox Live Gold but also EA Play. So we suggest taking an Ultimate subscription and enjoy the best of Xbox.