Xbox Games with Gold for August 2020 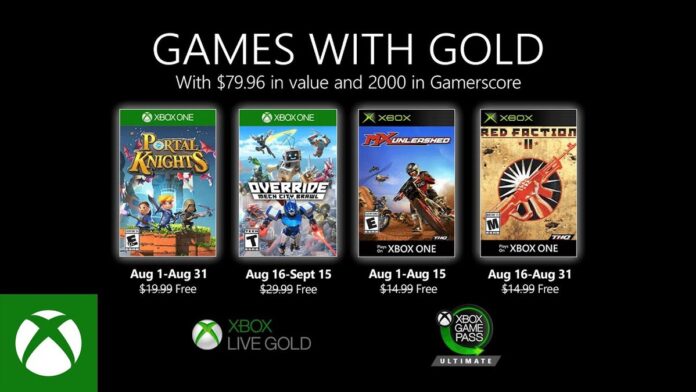 The Xbox Games with Gold for August 2020 was announced last month by Xbox. Although July had Saints Row 2 and WRC 8 FIA World Rally Championship. This month’s selection is rather underwhelming in comparison, yet offers some wholesome and meaty experience.

The list for Xbox Games with Gold for August is given below; additionally, with descriptions from the Microsoft Store. As always, two games will be on Xbox One, and two will be on both Xbox One and Xbox 360.

Prove yourself a Portal Knight by leveling up your character, crafting epic weapons, and vanquishing foes in real-time in this cooperative, 3D sandbox action RPG. Explore dozens of randomly-generated islands! Build almost anything! In a world torn apart by the Fracture and terrorized by the Hollow King, you and your friends are its only hope! – RPG character classes including warrior, ranger, and mage.

Furthermore, this game has co-op multiplayer. Perfect for a family.

No gears, no glory! Control gigantic robots and duke it out across fantastic cityscapes in this 3D mech-based brawler! Epic and explosive battles await with distinctive mechs in local and online versus mode, party co-op with two to four players, and a single-player campaign. Pilot a diverse roster of epic, skyscraper-sized mechs, each with their own playstyle, special moves, and finishers.

Rainbow Studios returns to its heritage to bring the definitive next-generation off-road game to life. If you want more intense action, battle it out with a monster truck, helicopter, or bi-plane!

Twenty-second century Earth. Five years after the rebellion on Mars. For the last 15 years, Sopot, the corrupt dictator, has oppressed the people of the Commonwealth. His relentless pursuit of unification with the neighboring United Republic has left the country soaked in unnecessary bloodshed and poverty.

Another game that offers local co-op, Red Faction 2 puts players in a sandbox open world. To add, this game kind wants to be a Halo clone.

Even though most of the games are not appealing to the masses, almost all the titles of this month offer local co-op. So, that’s a big win.