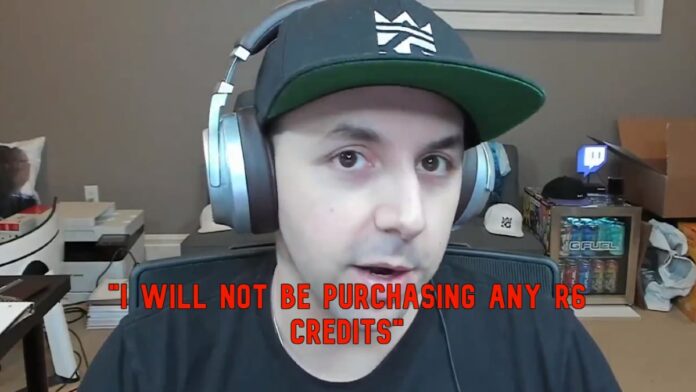 KingGeorge, who has turned himself into an R6 streamer after stepping down from the competitive scene, is fed up with the current cheating situation and has declared not to purchase any R6 Credits until the issue gets mitigated.

In a clip shared on Twitter, KingGeorge stated, “I still love the game, but it annoys the hell out of me when I’m always playing against people that are cheating. I got 274 ELO rollback today against cheaters that I beat, and no one that I’ve played with has been banned; this system, in my opinion, is just bad. The anti-cheat in general just needs to be improved.”

KingGeorge continued sharing his disappointment and his future actions:

“I personally will not be purchasing any more Rainbow Credits at all. I had 8,000 or so credits currently. I will buy each new Battle Pass that comes out, so I can still get the new Operators and stuff… but I’m not gonna be buying any more.”

KingGeorge even invited others to join him in this movement and put up a voice against Ubisoft. Players have been sharing their frustrations of playing ranked matches at a high level for quite some time now. And currently, with so many cheaters, elo & match-cancellation abuser, Siege is becoming almost unplayable for many of the players.

Ubisoft did state in their anti-cheat blog that they are trying their best to solve the long-running cheater problem, but according to KingGeorge, this isn’t enough.

While this action from KingGeorge might not immediately fix the issue or put a huge dent in credit sales, it will surely catch Ubisoft’s eyes. Hopefully, they will double down on their efforts to reduce the number of cheaters.