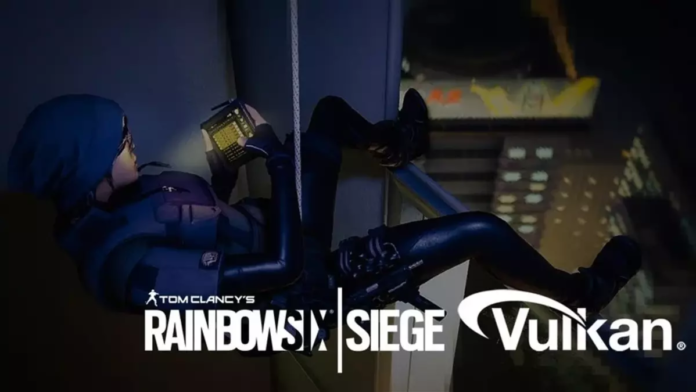 Ubisoft previously tested its first iteration of the Vulkan Graphics API implementation, back in Nov 2019, on the Rainbow Six Siege test server. Although it didn’t go as smoothly as they wanted. As frequent crash occurrences forced the developers to revert the changes.

But after intensive internal testing, as well as some outings on the test server, Ubisoft is finally pushing the new API update on the live servers. Ubisoft acknowledged, in the video below, that this will be the biggest test for Vulkan API. As it stands against a wider variety of hardware and a greater population of players. This will aid the development team to ensure overall stability with Vulkan while monitoring performance changes.

What is a Graphics API & Why Vulkan?

Vulkan and DirectX 11 are Graphics Application Programming Interfaces, known as Graphics APIs. They act as a communication medium between games and a player’s Graphics Processing Unit also known as GPU.

Rainbow Six Siege currently uses the DirectX11 API, which delivers great performance, but at times it can be CPU hogging. Consequently, many users have already complained about 100% CPU usage which can get really frustrating. This is where the Vulkan API comes through.

“The right API can offer features that allow us to enhance workloads and performance. Some APIs such as Vulkan is also much closer to the bare metal hardware and therefore require less CPU usage” stated Ubisoft in their Vulkan Blog. Hopefully, this will help unleash the full potential of your GPU’s power. As every frame matters when it comes down to a competitive shooter like R6S.

However, Ubisoft also stated: “Please keep in mind that as we are still in the process of tweaking and testing Vulkan for Rainbow Six Siege, some players may see no change or potentially decreased performance with the initial live release“.

No matter the performance now, we have to agree that this is a bold step taken by Ubisoft to try out a new API. They are maintaining the continuous effort to deliver improved graphics performance for every player, which is their end goal as stated in the video above.

Patch Y4S4.3 dropped on 28th January on PC and coming to consoles on 29th January. So, update the game and try it out yourself.