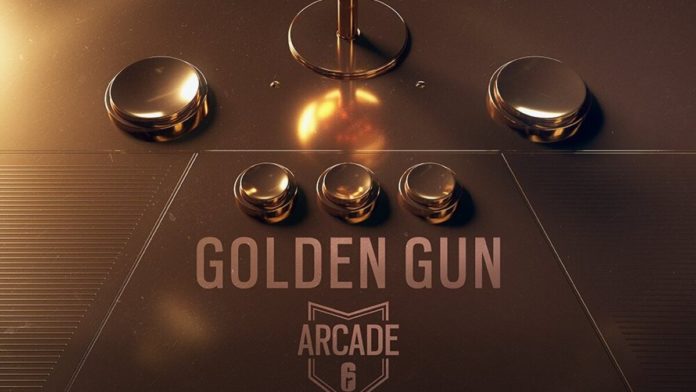 First announced back at the Six Invitationals 2020, the New Arcade Playlist is finally introduced by Ubisoft on live servers. Starting 19th March, the new one-shot, one kill mode will be adding a new unique element to this FPS game than what you are used to.

The Golden Gun mode is the first of many “Arcade Playlists” that Ubisoft will introduce over a course of this year. The mode will last for 4 days, coming to an end on March 23, so get warmed up and put your Deagle skills into action.

How does it Work?

The Golden Gun mode still uses the 5v5 format, where you will play 3-minute secure-area rounds on the newly reworked Oregon map. However, you will only get a single weapon- the golden Deagle- to deal with your enemy with only one shot. With a single shot, the enemy will die, but if you miss you have to reload your weapon again, as the Deagle can only house a single bullet in its chamber.

Still not sure how it works? Heres a video from Coconut Brah himself from his second channel.

The limited-time “Arcade Playlists” will continue through Year 5, however, the mid-season events will still remain on its own. Although the gameplay is slightly different in this Golden Gun mode, the game mechanics is still the same, as you can still use all the operator’s abilities and gadgets.

Additionally, Ubisoft announced a 50% renown boost event for 3 days for PC/PS4, so now is a better time than ever to hop into Rainbow Six Siege and one-shot some enemies.

Also See: Razer is making Surgical Masks to fight against the Coronavirus