A Polish Streamer’s food was stolen for the 2nd time during Livestream.

AikoiEmil is a Polish Streamer on Twitch with more than 38,000+ followers. His Twitch channel is ranked #76 Polish channel and #4065 overall. Usually, he is seen streaming under the just chatting category but occasionally plays games like Sea of Thieves, Rust, etc.

AikoiEmil is mainly a Travel & Outdoors/Food & Drink streamer. So, he likes to travel and enjoys food. During his May 12 Livestream, he was enjoying some food outside near the sea. But something unexpected happened, which left him baffled. This is the 2nd time the same thing has happened to him.

Read More: xQc Admits to Still being Addicted to Gambling Stating it as an Illness

As mentioned previously, AikoiEmil was enjoying food outside near the sea during Livestream. But, at the corner of the screen, his viewers saw a predatory bird circling over his head. Then without any warning, the bird swooped down and snatched the food from his hand.

AikoiEmil was left baffled and could only utter the words “K*rwa”. 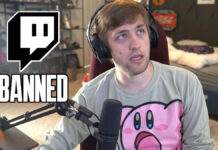