PlayStation Plus free games for January 2021 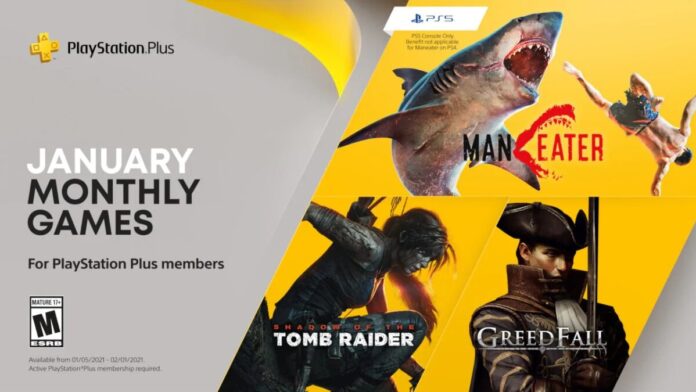 Sony recently announced the PlayStation Plus free games for the month of January 2021, and it’s quite a keeper.

Starting the new year, PS+ subscribers will be getting three new games for free, as part of the monthly free games rollout for the subscription. Furthermore, one of the free games, Maneater will be available only for PS5 owners. As the game will be a PlayStation 5 enhanced version.

Nevertheless, the other two games available for PS4 owners are a blast to playthrough. Giving players to play an open-world RPG, in addition to a semi-linear action-adventure game, Tomb Raider.

Read more: All the games releasing in January 2021

The PlayStation Plus free games for January 2021 are:

Although Maneater is not as well received the other two games will no doubt provide some worthwhile gaming sessions. Especially Greedfall, a lesser-known RPG. Even though nothing groundbreaking, Greedfall mixes, storytelling, diplomacy, and combat in a well-rounded and beautiful looking game. Greedfall currently has a Metascore of 72.

Moreover, Shadow of The Tomb is also the less well-received in the whole trilogy, yet this darker and grimmer take on Lara Croft’s adventures fares nicely.