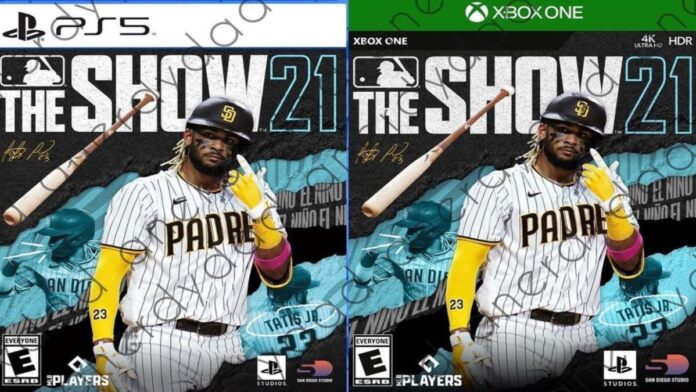 PlayStation exclusive, MLB The Show 21 is coming to Xbox according to this leak. The first time Sony’s in-house developed game is heading for Xbox consoles.

MLB The Show has always been an exclusive title for the PlayStation consoles. But new leaks show that the franchise will be coming to Xbox consoles for the first time in history. This is big because the MLB The Show 21 is developed by  Sony San Diego and published by PlayStation. Hence it is a well-established PlayStation exclusive.

Although at the end of 2019, it was announced that the baseball sim will release on other consoles. According to this leak, it seems that we might see an official announcement soon.

Instagram post by user anerdydad shows the cover art of the upcoming MLB The Show 21. Furthermore, along with a cover of PlayStation 5, it also includes cover art for Xbox One. It also has the Sony Studios logo. A truly weird sight.

It might just be fan render and not official. But another Reddit leak further strengthens the leak. It shows a Jackie Robinson Edition, a sort of Deluxe Edition for early access owners. It has both PlayStation and Xbox consoles labeled. Additionally, has a release date of April 20.

MLB 2k13 was the last simulation type baseball game on Xbox consoles, released for Xbox 360. No one expected MLB The Show 21 to release multi-plat. But the baseball genre is not a hugely popular genre, unlike FIFA or racing games. Hence, it is quite understandable for the devs to want more exposure for the baseball game.

Nevertheless, this is not the first first-party game is published multi-plat. We saw Ori and the Blind Forest released on the Switch. As well as Minecraft on PlayStation and Nintendo consoles. Both owned by Microsoft.

Even though this can only lead to good things, we probably won’t see games like God of War, Uncharted on Xbox, or Halo on the PS5.

Read more: Returnal has been delayed till April 2021

Microsoft Flight Simulator rated for Xbox One by PEGI