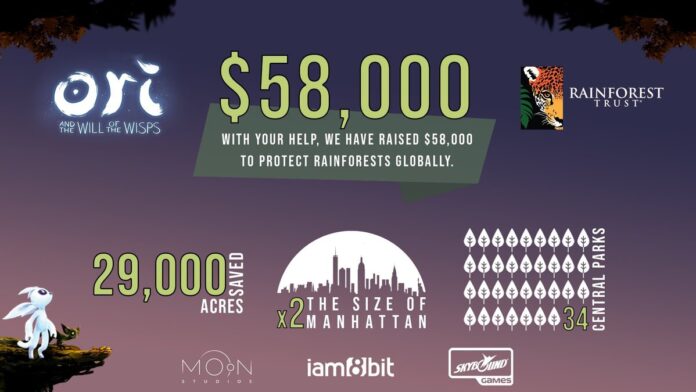 Ori and The Will of The Wisps team Moon Studios have raised and donated $58000 to Rainforest Trust, teaming up with other studios.

The Ori franchise has earned trust and respect from the two amazing and beautiful games they produced. Now considered one the greatest arsenals of the Xbox consoles, both Ori is now a must-play Metroidvania.

Read more: All the games releasing in February 2021

Recently, the team behind this artistic game has raised and donated a hefty sum, for the preservation of rain forests. Moreover, The team behind Ori and the Will of the Wisps, Moon Studios teamed up with Skybound games and  iam8bit to make this initiative a success.

Initially, this plan started when Jon Gibson of iam8bit posted a video, where he talked about their plans and goals. Furthermore, here he mentioned that instead of the common marketing, they pledged to donate to the Rainforest Trust. Hence, by this Ori and The Will of the Wisps will gain more attention. In addition to paying homage to the rainforests, and their importance. In fact, the Ori franchise is heavily based upon rescuing and the importance of forests.

5% of all proceedings of the Switch sales of Ori and the Will of the Wisps from an entire week in mid-December, iam8bit’s pledge to donate $25000, and Skybound’s contribution led to a huge donation of $58000 to the Rainforest Trust fund. This amount is enough to protect 29,000 acres of land.

On the other hand, it also leads to realization, how successful this game has been on the Switch.

Moon Studios has delivered with sheer perfection, and now it seems they are already working on future projects. As they announced that Moon Studios teamed up with Private Division to work on an action RPG.