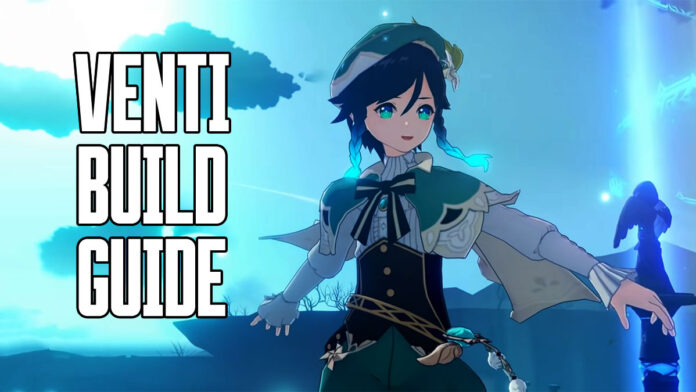 Here is the best build guide for Venti, one of the first 5-star characters in Genshin Impact.

Genshin Impact version 2.6 is expected to be released in less than a week. The new 5-star character Kamisato Ayato is going to get released with Venti and Kamisato Ayaka having their rerun banners.

Venti is a 5-star Anemo bow character in Genshin Impact. He is a free-spirited, wine-loving bard in Mondstadt and the current mortal vessel of Barbatos, the Anemo Archon. Venti is one of the most popular playable characters in the entire game, and he was also one of the first 5-star Banner characters to ever appear in the game.

Below is a comprehensive build guide for Venti, the Anemo Archon.

Normal attack: Perform up to 6 consecutive shots with a bow.

Plunging attack: Fires off a shower of arrows in mid-air before falling and striking the ground, dealing AoE DMG upon impact.

O wind upon which all hymns and songs fly, near these earth-walkers up into the sky!

Summons a Wind Domain at the enemy’s location, dealing AoE Anemo DMG and launching enemies into the air.

Summons an even larger Wind Domain with Venti as the epicenter, dealing AoE Anemo DMG and launching affected enemies into the air. After unleashing the Hold version of this ability, Venti rides the wind into the air. Enemies hit by Skyward Sonnet will fall to the ground slowly.

Fires off an arrow made of countless coalesced winds, creating a huge Stormeye that sucks in objects and enemies along its path, dealing continuous Anemo DMG.

Holding Skyward Sonnet creates an upcurrent that lasts for 20s.

Regenerates 15 Energy for Venti after the effects of Wind’s Grand Ode end. If an Elemental Absorption occurred, this also restores 15 Energy to all characters of that corresponding element.

Decreases gliding Stamina consumption for your own party members by 20%.
Not stackable with Passive Talents that provide the exact same effects.

Read More: HoYoverse President Explained How Many Genshin Impact Characters They Plan to Release Per Year

Elegy for the End

We can see Venti has a number of good weapons available in the game. The Stringless is the best on slot weapon for Venti. It is a 4-star weapon so it can be easily obtainable from event banners. Meanwhile, Windblume Ode is also a good option for Venti if you have it. Windblume Ode was an event reward from the Invitation of Windblume event from the v1.4 update. Elegy for the End is an excellent 5-star bow for a support-oriented Venti build. And lastly, Skyward Harp is a 5-star bow with a really high base attack which can be good for a Sub-DPS Venti.

Venti is considered the king of crowd control because of his elemental burst. His elemental burst Wind’s Grand Ode fires off an arrow that creates a huge Stormeye. The Stormeye sucks in opponents and deals continuous Anemo damage. If the Stormeye comes into contact with Hydro/Pyro/Cryo/Electro, it will deal additional elemental swirl DMG. Because of his powerful burst, Venti is widely used in different teams and one of the most used characters in Spiral Abyss.

Venti’s elemental skill Skyward Sonnet is great for exploration because holding it down will cause Venti to glide. In combat, it can launch enemies up in the air as well as generate a lot of energy particles.

The most optimal way to play Venti is to utilize his burst and apply different elements to cause swirl reactions for extra damage. Venti can also act as an Anemo battery for DPS characters like Xiao.

In Genshin Impact, Venti is universal support in the game because of his versatility. He can be placed into many different team comps so there aren’t any specific teams we can recommend. But here are the most popular teams for Venti.

How to Get & Use Servants in V Rising

How to Get Paper in V Rising

How to Get Cloth in V Rising