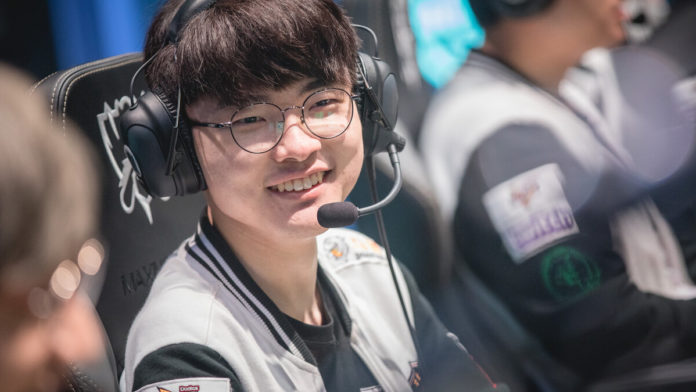 Legendary Mid laner Lee “Faker” Sang-hyeok has signed a new 3 year deal with SK Telecom T1. And also as a part of the agreement, Faker will be part-owner of the T1 Entertainment & Sports.

“I am excited to continue playing for T1 and am thankful for all the fans around the world who have supported me all these years,” said Faker. “I am honored to become a part-owner of T1 and look forward to working with the leadership team beyond my playing career. I love this team and am proud to help mold the future of this organization.”

Since his career starts with SKT back in 2013, he won three world championship (2013, 2015, 2016), two Mid-Season Invitationals, and eight LCK titles. Faker is known as the face of Esports and has fans worldwide. He was also named to Forbes 30 Under 30 Asia.

Due to his success worldwide an NA team also offered his a BLANK check to join them but he still refused to join them and continue his career with T1. His fame in his home ground is also astounding. Faker thinks of the word “Best Esports Team in the World” is T1 and he is confident that he will continue to carry the T1 legacy.

T1 also showed their gratitude with Faker’s new agreement, “T1 is thrilled to have Faker on its roster for the next three seasons,” said Joe Marsh, CEO of T1. “Since T1’s inception, Faker has been the cornerstone of our team’s success and his undying passion for this organization will continue to drive us forward now that he is a part-owner of T1 Entertainment & Sports. Even after Faker’s retirement – whenever that maybe – he will begin the next chapter of his legacy in a leadership role with T1, helping to mold the next generation of elite esports athletes.”