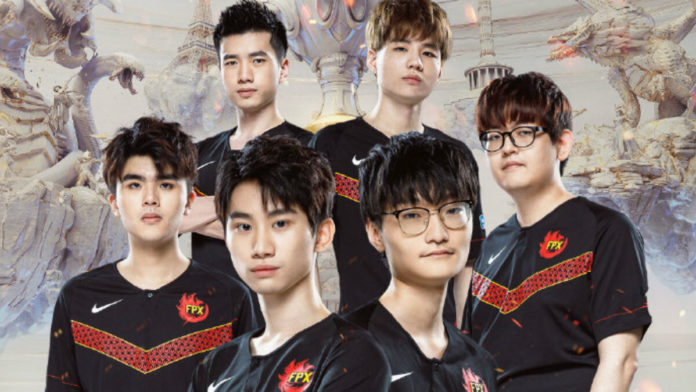 DoinB confirms on stream that FPX will be choosing Gangplank, Lee Sin, Malphite, Vayne, and Thresh for their world championship skins.

Funplus Phoenix won the 2019 world championship beating G2 Esports 3-0 to earn their own skins for their choice. In order to get a skin, a player must play at least one game with that specific champion in the whole tournament.

During a stream, FPX DoinB confirmed that they have chosen Gangplank, Lee Sin, Malphite, Vayne, and Thresh as their skin line up.

Gangplank and Lee sin was both GimGoon and Tian‘s most played champions with a total number of six games having 83% and 66.7% win rate. Crisp played Thresh four times with a 100% win rate, Lwx also has a 100% win rate win Vayne with two matches played.

Among all the champion choices, Malphite is clearly the most surprising one which is chosen by DoinB himself. DoinB played eight different champions with six Ryze games and only one Malphite game.

He chose Malphite because his wife can only play Malphite. He also said that it’s gonna be “the coolest Malphite skin ever” and “I have told Riot 100 times that they must add the dance move to the skin”.