Detailed List Of Damage To Get 10% Ult Charge – Overwatch 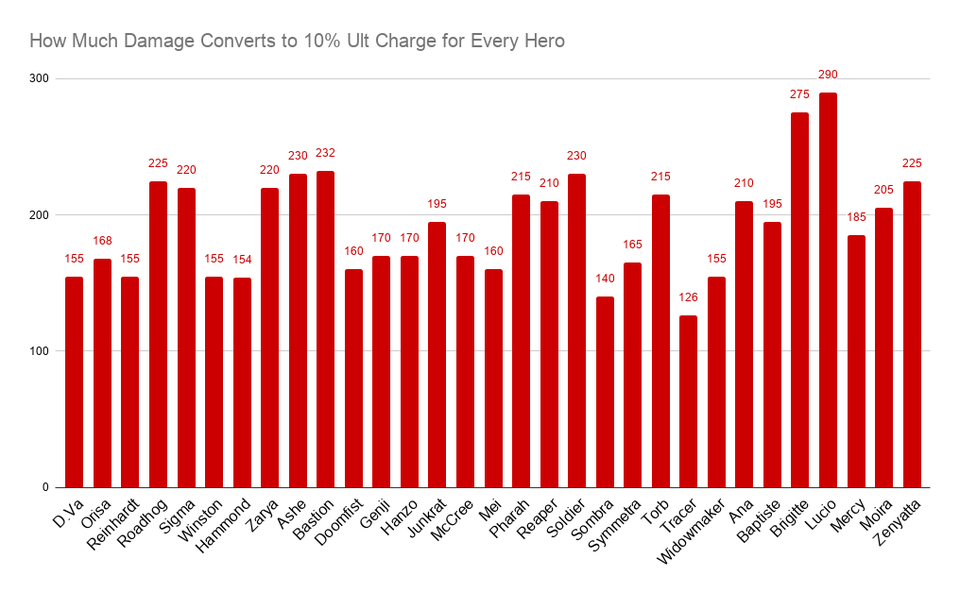 A lot of people don’t know how ultimates work in Overwatch. Here is a guide on how to get 10% damage on ult charge and ultimate cost explanation. For source: the wiki and u/Lightning_Laxus.

Ultimate can be charged by doing damage, healing and by doing nothing! Get enough ult charge, and you build your ult.

The ultimate generation from combat is how much charge you gain from damage and healing. The default is a perfect 1:1 ratio where you gain ultimate charge exactly equal to the amount of damage and/or healing you do. If Moira is using her damaging Biotic Grasp, she is dealing with 50 damage per second, healing herself 20 health per second, and gaining a total of 70 ult charges per second. Damage dealt = ult charge; healing dealt = ult charge.

The passive ultimate generation applies to all heroes which they gain 5 charges each second. This is not analog, meaning you wait 1 second to gain 5 charges, then you have to wait for another second to get another 5 charges.

But wait! If I get an ult charge equal to my healing/damage, shouldn’t I immediately get my ult as soon as I deal with 100 damage?

Heroes with the following features generally have higher costs (or faster charging ultimates):

Sound Barrier has an enormous ultimate cost but if you actually pay attention in-game, it’s actually not that slow charging as long as Lucio stays with his team. Lucio’s heal song can heal up to 92.3 healing per second without amping it up because of its AoE healing nature and how consistent his healing is.

Anyway, without further ado, here’s a grand list of ultimate costs at the time of writing:

When Blizzard increased all ultimate costs by 12%, on the initial PTR patch, they actually forgot to reduce Call Mech’s cost for compensation. They had to adjust it in another PTR update. The implication of this is that Blizzard is not individually inserting numbers for each ultimate cost; otherwise they “accidentally” typed 358.4 for D.Va’s new cost. The more likely scenario is that they changed a single number which affected all ultimate costs (probably 62.5, the common factor), but accidentally forgot to account for Call Mech.

Anyway, using that table, if you want to find how much damage or healing it takes to gain a 10% ult charge, just divide the cost by 10. Every 140 damage, Sombra gains 10% of her EMP. Do note that in an actual game, there is passive ultimate generation involved. In the time it takes Sombra to do 140 damage, she would’ve gained a lot of ultimate charge by just existing every second, meaning the actual % of her ult would be higher than 10%.

How to figure out the ultimate costs

Well, you don’t really have to since they’re already listed, but if you want to check the ultimate costs of future heroes, or if Blizzard decides to change the ultimate cost of a hero, here’s the general method:

This is the general method, but if you want to be more accurate (which is necessary for those weird costs like 319.2 and 2142), you can modify the ultimate generation values in custom games. (E.g. change the passive generation to 20% so you gain 1 charge per second.)

(If you try to use ultimate generation from combat alone to figure out cost values, do note that there is this very strange bug where the ultimate does not reach 100% even if the cost is completely fulfilled. It sometimes happens for damage too; very rarely, when you do exactly 200 damage like 40 Ball shots, the enemy survives despite having literally 0 HP. It’s very weird.)